A thirty-eight-year-old woman from Houston thought a personal trainer would improve her health, not leave her with debilitating injuries. 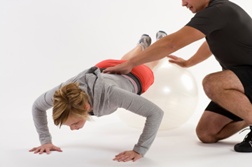 "The way she was treated was ridiculous and the trainer in this case was grossly negligent," says personal injury attorney Brad Wyly. "Basically she was hurt so badly after her second session that she had to seek treatment and eventually had to have two surgeries."

A year ago Nanette Plunkett went to the Fitness Connection in Houston, where she met with the head trainer. Plunkett wanted to improve her fitness level and lose a few extra pounds—and she wanted to go slowly, she told the trainer.

"They told her they would bring her along in a way that she would not get hurt," says Wyly. "But they paired her with a very young trainer. He worked her very hard during the first session—so hard in fact that she almost vomited. She had to stand under an air conditioner unit to cool off."

During the next session, the trainer set her up on a workout machine in the gym that caused her so much pain that she actually cried out. "The instructor told her this is the only way you are going to lose weight, that fat people always have these problems when they start working out," says Wyly.

The suit alleges that the Fitness Connection is guilty of negligent hiring. "She told them she had certain health issues and they basically ignored it," Wyly explained. "She has substantial medical bills. She has damages in the form of pain, suffering and impairment— she is walking around with a cane—and loss of wages, as she hasn't been able to work.

"It is pretty clear that if someone tells you they are hurt you don't continue. You have a responsibility to start slowly and build up their strength."