Nail Guns in the Wrong Hands Lead to Nail Gun Injury, Even Death

The good news is that nail gun injuries amongst contractors, carpenters and other skilled and qualified laborers are on the decline. The bad news is that high-powered nail guns are increasingly available and used by home handymen and so-called "weekend warriors" looking for a faster and more efficient way to complete home renovations. 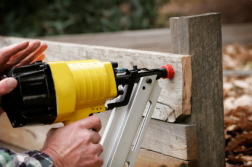 Critics say nail guns are capable of lethal injury and should be licensed much like a handgun and sold only to qualified contractors.

Last year the body of a 27-year-old man was pulled from the Georges River in Australia, bound and wrapped in a piece of domestic carpet. There were several puncture wounds to the head. When technicians X-rayed the skull, they were horrified to find about 30 three-inch nails fired into his head.

Other nail gun injuries are much less severe, as with the American construction worker who was working on a wheelchair ramp earlier this summer. Experienced in the use of nail guns, he nonetheless accidently shot himself in the leg after tripping at the construction site.

Researchers at the Duke University Medical Center in North Carolina have found that injury rates among carpenters and their apprentices have declined 55 percent over the past five years, thanks to early training in the use of nail guns, as well as use of tools featuring sequential actuation.

However, in 2007 ABC News reported on a previous Duke University study that found that nail gun injuries more than tripled over a period of 16 years. According to emergency room records, there were 4,200 nail gun injuries from home use in 1991. By 2005 that number had ballooned to 14,800.

The study showed that 40 percent of all nail gun injuries were sustained by those not professionally involved in the construction industry.

Critics point to the fact that a nail gun is similar to a revolver, capable of shooting sharp metallic objects at high speedcwith one difference: Nail gun manufacturers have been moving to "sequential-trip trigger mechanisms," whereby the gun will only fire when the nose has been firmly placed on the target.

On June 29, 2006 the US Consumer Product Safety Commission issued a public safety notice for a consumer-level nail gun citing its potential to eject a nail unexpectedly, according to ABC. In 2007, another type of nail gun was recalled after similar complaints were reported.

Still, accidents happen, even with models considered safe. Construction accidents happen, said Dr. Corey Slovis, professor and chair of the department of emergency medicine at Vanderbilt University Medical Center. "Often, a person is on the opposite side of the wall, and their partner or coworker misses the stud, and the nail goes straight through the wall into their head," he said in the 2007 ABC report.

"Some of the people who use these nail guns get rid of the safety so it can be fired rapidly. Occasionally, people sit on them. Occasionally, they'll go off in the holster and hit a leg. In general, these are deep puncture wounds, though the nail occasionally embeds in bone," he said.

One blogger noted that while retailers are supposed to restrict the sale of nail guns to qualified adults, not all do.

Lead study author H.J. Lipscomb, associate professor of occupational and environmental medicine at Duke University Medical Center who was involved in both studies, said in 2007 that the availability of nail guns in most major hardware stores made it much more likely that consumers would be able to get their hands on one. "I don't think these tools have gotten any more dangerous," Lipscomb said at the time. "It's more an issue of easier access."

It is also possible to buy nail guns online—and to purchase nails anywhere.

Given the potential for serious injury and death involving nail guns, it's a wonder that government and manufacturers do not move to more carefully restrict their sale and availability.

If you have suffered losses in this case, please send your complaint to a lawyer who will review your possible [Nail Gun Lawsuit] at no cost or obligation.
Request Legal Help Now