A motorcycle accident was the last thing James expected during a motorcycle training course, especially since the instructor was at fault. Yet he found himself with a hefty repair bill and the possible rise in his insurance rates.

"Our class had just finished taking a test for the motorcycle safety course," James recalls, "when the instructor announced that all of the maneuvers we'd just learned could be done on bigger bikes. We all wanted to see a demonstration so he brought my bike out onto the range. Mine is a 1990 Harley Davidson FLHS Electric Glide 1340cc, much bigger than his Buell Blast 125cc. 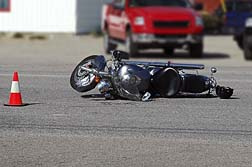 The first maneuver he showed us was a U-Turn Box, which is one of the more difficult ones. He wasn't used to the balance and the height of the bigger bike so he had to drop a foot during this figure eight-type turn. Then he opened the throttle and went to do a swerve, as if to avoid something on the road, but the front tire snaked in the parking lot. That's when a crack in the pavement is patched with tar, but in this case the tire seemed to grip the front tire snake, went in between it, and being a fast maneuver, the instructor lost control. He hit the left side, the right side, then the left again and scraped all along the pavement.

Immediately he jumped up and the first thing out of his mouth was 'don't worry, don't worry, I'll pay for everything.' All six of us from the course were right there and heard him. We brought the bike back inside and he was still all apologies.

Three days later I got a call from his insurance company. They weren't going to cover the accident. The way a bike insurance works is that the insurance covers the person but not the bike.

So I approached the bike dealership--where I bought the bike--and who also ran the safety course, and explained the situation. It turned out they'd been told a totally different story by the instructor. He told them that during the course I'd taken a fall on the training Buell and, being too hurt to ride home, he had ridden my bike and that's when he'd had the accident. The true part was that yes, I'd fallen and I was in pain but could still ride. The rest was an outright lie.

I denied his story to the dealership and even offered to take them to the practice range and show them the scrapes but they said, 'No, we believe you. We're just disappointed he gave us another story'."

The dealership, in good faith, contacted their insurance providers in an effort to have the repair costs covered. James, on his end, was informed by his insurer, Foremost Insurance Group, that his rates may increase because he wasn't riding the motorcycle, but that would only be confirmed when his policy came up for renewal, in June 2008. In the meantime, James spent a frustrating four months in and out of the repair shops.

"The way it stands," James says, "I didn't end up paying any deductible but I did sign over two cheques to the dealership, which means my insurance was paid. So my insurance may go up and I'm not even responsible.

The dealership has turned it over to their insurance and we've heard nothing back yet so I'm not sure the two companies aren't still battling it out.

More MOTORCYCLE ACCIDENT News
So I'm in limbo right now. I've put out $2,800 to pay for motorcycle accident damage and there's one last little repair to do on my bike. I'm feeling pretty peeved right now--I mean, it wasn't my fault. It's not like I handed my bike over to just anybody. If you hand it over to an instructor of the course you expect it to be handled like a professional.

Right now, I'd like to know what my recourse is, if anything. I've been told to take it to small claims but I'm not sure. I'm at a loss."

Most insurance policies for motorcycles offer similar coverage of standard collision, liability, medical, safety apparel and optional equipment, as well as offering extra provisions for uninsured/underinsured motorists. Even if a driver accurately anticipates his or her future needs with their agent, who would think to consider the unthinkable, like an instructor-caused accident? A lawyer can help navigate when a motorcycle accident goes beyond the ordinary.