In fact, motorcycle deaths have risen an astonishing 128 percent since 1997. 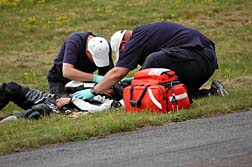 US Government safety officials released a report August 14th, which appears to suggest that the death rate on the nation's roads from all types of altercations is at an historic low. Deaths in cars fell 7.8 per cent, and deaths recorded in light trucks dipped by 2.7 percent. Alcohol-related deaths fell, as did the death rate for people killed riding a bicycle, or on foot.

Everything fell—except—motorcycles, from which more people died than last year for the tenth straight year. In spite of all other causes of highway deaths dropping, death by motorcycle surged 6.6 percent in 2007.

Experts expect that trend to continue.

There are a number of reasons for this, not the least of which is the high price of gasoline. Motorcycles are much more fuel-efficient, getting on average 50 miles per gallon vs. 20 for the average car. Mary Peters, the Secretary of Transportation in Washington is, herself, a longtime Harley-Davidson aficionado.

There are other factors. People at mid-life want to taste things they haven't tried before, and the acquisition of a bike and a set of leathers is becoming a popular diversion for the aging Baby Boomers, the largest wave now representing the midlife demographic.

Others have ridden motorcycles as young men or women, but abandoned the bike to raise a family. Now that the kids are grown and the bank account a little less stressed, they're splurging in an effort to recapture some of their youth.

State helmet laws don't help, either. Readers may be surprised to know that in 1975, 47 States mandated that motorcycle riders wear a helmet. One might easily assume that with the passage of time, that statistic might have grown to all 51 States.

Nope. It's gone the other way. Only 20 States now require riders to wear a helmet.

This seems to fly in the face of the rest of the transportation industry, which is striving to make cars safer—and government officials have suggested that this effort to increase the crash worthiness, and survivability of cars, is one reason why the statistical death rate is down. And even though people are moving to smaller cars in an effort to mitigate the amounts they are spending on gas, smaller cars are much safer than yesteryear: the Honda Fit, for example, which some refer to as a 'micro-wagon,' comes equipped with six air bags as standard equipment.

But there is no such compliment of airbags on a motorcycle. It's still just the rider surrounded by open air and the sheet metal of the other cars, and trucks on the road. Worse, in 31 States you can be caught riding without a helmet and they'll just wave you by.

Alcohol is also a factor. Statistically, a motorcycle rider is seen to have a 2.5 percent greater probability that he, or she will be under the influence on a motorcycle, than if they were in a car.

More MOTORCYCLE News
There is one area that the numbers don't trace, and that is the relationship of people with their cars, and how that impacts a motorcycle. In other words, bikes and cars have to share the same space, and all too often you hear reports of a motorist cutting off a rider, turning right into their path, failing to see them at night AND in the daytime. And while death rates in motor vehicles are dropping, and cars are being made safer for the occupants, the same cannot be said for anyone in the immediate space of a car equipped with cell phones, iPods, DVD players, GPS systems, and increasingly complex stereo systems. Even though cars are safe, distractions are at an all-time high. Don't forget that texting, rather than speaking on a cell phone is exploding in popularity, and portable Internet devices allow people to stay connected, even while driving.

It can be said that more and more people are driving as a secondary function to talking on the phone or reading a text, actually texting a massage, fiddling with the GPS or with the stereo.

If they hit something, chances are good that in that safe car, they will be free from death or serious injury.

However, there are no air bags on the exterior of a car, to cushion the impact for the motorcycle rider you have just plowed into…