Other Drivers Often the Cause of Motorcycle Accidents 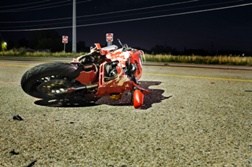 Contrary to popular belief, bad weather and driving conditions are not the number one cause of motorcycle accidents—in fact, a famous study found that weather was rarely a factor. According to the study, other vehicles cause two-thirds of multiple vehicle accidents involving motorcycles.

The study, conducted at the University of Southern California and funded by the National Highway Traffic Safety Administration, was titled "Motorcycle Accident Cause Factors and Identification of Countermeasures." Lead investigator Harry Hurt (from whom the study takes its nickname, the Hurt Report) investigated every possible aspect of approximately 900 motorcycle accidents in the Los Angeles area and further analyzed 3,600 motorcycle accident reports in the Los Angeles area. He then issued a comprehensive report on the main causes of motorcycle accidents and potential countermeasures to protect against accidents and injury.

More MOTORCYCLE ACCIDENT News
According to the report, "all past and present research as well as this present study have shown that weather simply is NOT a factor in motorcycle accidents; the weather at the scene of a motorcycle accident is clear and dry in more than 904 of the accident cases."

Although the report was published in 1981, the findings are still relevant today. Unfortunately, motorcyclists are still involved in serious accidents when other vehicles fail to yield right-of-way. In such circumstances, the motorcyclist is vulnerable to catastrophic injury.

Even famous motorcyclists are not immune to injury. Guitarist Gilby Clarke, formerly of Guns N' Roses, was riding his motorcycle through an intersection on January 16 when an oncoming vehicle made a left turn in front of him, violating his right-of-way. Clarke was hospitalized with injuries to both his feet and has since undergone surgery. The other vehicle left the scene of the accident.