More MOTORCYCLE ACCIDENT News
Gilby Clarke, best remembered as the guitarist for hard rock stalwarts Guns N' Roses, may soon be in contact with a personal injury lawyer after a hit-and-run accident threw him from his motorcycle. 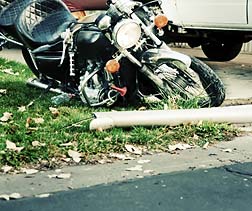 Clarke, a Los Angeles resident, was riding his motorcycle around 5 pm on January 10 when a tan-colored truck cut the bike off and sent the guitarist careening into the vehicle's passenger side door, according to Noisecreep.com. The driver of the truck failed to stop at the scene and remains at large.

The guitarist broke his leg in three places and will undergo a series of surgeries to repair the damage.

Riki Rachtman, former MTV host and friend of the injured rocker, has taken to the internet, asking fans for any information they may have on the other driver.

"While Gilby can't walk, since both legs [are] broken, the idiot that hit him and left is walking around somewhere with no guilt for what he did," Daniella Clarke, the guitarists' wife, writes on her Twitter account.

If you or a loved one have suffered losses in this case, please click the link below and your complaint will be sent to a personal injury lawyer who may evaluate your Motorcycle Accident claim at no cost or obligation.
Request Legal Help Now