More MOTORCYCLE ACCIDENT News
The city of Angels may have to face a personal injury lawyer after post-mortem toxicology reports found dangerous levels of alcohol in the system of an LAPD officer involved in a fatal motorcycle accident earlier in the month. 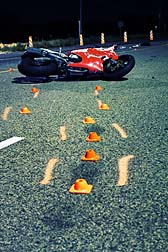 According to the LA Times, Officer Kenneth Aragon, a 19-year veteran of the LAPD, was seen drinking and singing karaoke with other officers and guests at a reception held at the local police academy.

Aragon left the festivities on his motorcycle around 12:30 a.m. and crashed 90 minutes later, a mere 3 miles from the academy. Officials have not accounted for the missing time between Aragon's departure time and the timing of the accident, but have suggested that the 47-year-old father of five may have visited another bar.

Police are working to determine how much alcohol Aragon actually consumed before leaving the academy that night.

LAPD Commander David Doan, the officer overseeing the inquiry, tells the Times that Aragon was "certainly under the influence" and that the Academy would face stricter scrutiny "looking at whether there is adequate oversight."

If you or a loved one have suffered losses in this case, please click the link below and your complaint will be sent to a personal injury lawyer who may evaluate your Motorcycle Accident claim at no cost or obligation.
Request Legal Help Now