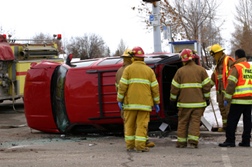 According to the news provider, 24-year-old Ahmed Salman Almahuzi has been charged with involuntary manslaughter in the death of his classmate, 24-year-old William McCreary.

A statement of probable cause says that a man standing at a bus stop saw a "muscle car" run a red light, narrowly avoiding another vehicle before flying through the air after hitting railroad tracks.

According to the Springfield News-Leader, marks on the road indicated that the 2003 Nissan 35OZ slid on its side through two utility poles after landing. McCreary was reportedly hit by the vehicle while he was walking on the sidewalk.

Almahuzi, who is from Saudi Arabia, is reportedly in Missouri on a student visa. A phone message left for his attorney by The Associated Press was not immediately returned.

According to the National Highway Traffic Safety Administration (NHTSA), there were 878 traffic fatalities in Missouri in 2009.