Homes and Businesses Not Safe from St. Louis Traffic Accidents 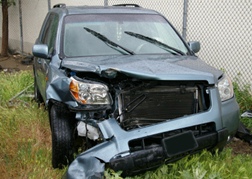 On Friday, May 7, a car chase ended in peculiar fashion as when a suspect fleeing arrest from a domestic dispute charge plowed into a suburban St. Louis home between two elderly women who had been sleeping at the time. The driver had been chasing his girlfriend and firing his gun at her vehicle, eventually striking her in the shoulder.

The man crashed into the home and his girlfriend into a nearby tree, where police apprehended them after a short gunfight. The two women inside the house were unharmed.

Workers at a St. Louis gas station faced a similar trial later in the week, when an SUV in the parking lot failed to break while pulling into a space and drove straight through the outside wall of the gas station early Monday morning.

Fortunately, no one was injured and the gas pumps were undamaged, though store owners estimate that the incident caused several thousand dollars in damage. The driver has been cited, according to Fox News.