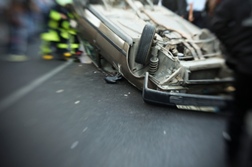 The Missouri State Highway Patrol has reported that Herschell D. Sloan was driving a truck northbound when he crossed the center line, crashing head-on into a 2004 Buick. The accident occurred at about 3 pm on Tuesday. The impact killed Mr. Sloan and seriously injured his wife, 56-year-old Carolyn S. Sloan, and one other passenger, 41-year-old Shon B. White.

The driver of the Buick, 79-year-old Pearl F. Thornton, was also seriously injured. It took emergency crews over half an hour to extract her from her car, which was thrown several feet into a ditch running alongside the highway. Both she and Carolyn were taken by helicopter to a Cape Girardeau hospital for treatment of their injuries.

The Sloans were pulling a utility flatbed trailer at the time, and the contents – a refrigerator and several bags of garbage – were strewn across the highway as a result of the accident. Traffic on Highway 25 had to rerouted for over an hour following the accident.

The only person wearing a seat belt was Mrs. Thornton.

Click to learn more about LawyersandSettlements.com
LawyersandSettlements.com is an online news and information site for the general public and legal community. As a legal news resource, we have emerged as an independent & trusted voice. We provide detailed and quality information on various lawsuits filed including Accidents, Automotive accidents, and Personal Injury Cases.