More missouri car accident News
One man was killed and two others injured in a Missouri car crash on Sunday. The crash occurred on southbound Sand Run Road, two tenths of a mile south of Adelhardt Road at 3:55 pm, according to the Missouri State Highway Patrol. 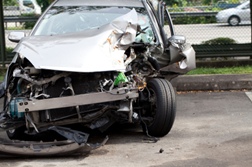 Twenty-four-year-old James Farrar of Troy was driving a 2003 Nissan 350Z southbound and was reportedly speeding when he collided with a northbound 1998 Chevrolet Silverado pick-up, driven by 58-year-old Roger Bolle of Troy. The accident report states that Farrar lost control of his vehicle and crossed over the center line. The right front of the pickup struck the right side of the Nissan.

Farrar was ejected from the Nissan by the force of the collision, and the vehicle traveled off the road and hit a fence. The pick-up came to rest in the northbound lane.

Farrar was taken by Lincoln County Ambulance to Lincoln County Medical Center, where he was pronounced dead. His passenger, 14-year-old Joshua Farrar of Troy, was taken to Cardinal Glennon Children's Medical Center by air ambulance. The driver of the Silverado was flown to St. Joseph West Hospital. Joshua Farrar was wearing a safety device at the time of the crash, but neither James Farrar nor Roger Bolle were wearing seat belts.

Click to learn more about LawyersandSettlements.com
LawyersandSettlements.com - A trusted, independent legal news provider bringing quality news and information on legal cases and lawsuits filed in the United States of America to its readers since 2002. Over 650,000 legal help requests including Accidents, Automotive accidents, and Personal Injury Cases have been forwarded to lawyers all across to the country.