Imagine having AARP insurance and being told that your medical procedures are covered, only to find out your insurance has been cancelled. That is what happened to Donna J. (not her real name), who says her AARP health insurance was supposed to cover her eye surgeries. However, when it came time to pay up, the insurance company conveniently found a way to get out of paying the medical bill. 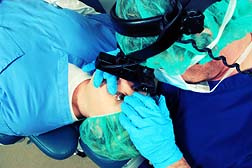 "After the surgeries were done, we got a letter in the mail that said that my insurance had been cancelled. I was sick about it. I didn't understand it. The insurance company said it was cancelled because when I filled out the form, I didn't check off that I had diabetes. They checked my doctor's records, which said I did have diabetes—but I don't. My doctor told me that I needed to watch what I eat and recommended I follow a diabetes-type diet, but to this day I don't have diabetes.

"They also said that my doctor recommended I have lap-band surgery. That's not true. I saw something on television about lap-band surgery and I asked him about. My doctor is like a friend to me and so I can talk to him about that stuff. He said, 'My sister had it done, so I guess it's good,' but that is all. He did not recommend it—I just asked about it.

"My doctor explained to them that I do not have diabetes and my husband called AARP to discuss it. We had to keep going back and forth with AARP. Then, my husband called the Insurance Commissioner of North Carolina to talk to AARP."

"It was minimal coverage—only $150 per eye. AARP said they would reinstate the initial policy but, because they decided we made untrue statements, it would cost us extra money to get the same policy. We couldn't afford that, so we had to take a lesser policy. It's probably only 10 percent of what my wife had before. The statements were not untrue. She is not diabetic or even pre-diabetic. But they say she made untrue statements."

More AARP News
"I have to go back to the eye doctor, but they don't really want to see me because I owe them so much money," Donna says. "I'm between a rock and a hard place. We owe about $6,500 just to them. My husband and I are both out of work and we don't have good insurance, so we are having a hard time paying it.

"There were other things, too. I had a mammogram and a physical that I thought were covered by my insurance and then the insurance was cancelled and so I'm paying for those things as well.

"We were led to believe the insurance would cover 100 percent of the surgeries. We were thrilled about it—that took care of my eye surgeries. The doctor's office was told the same thing. Afterwards, we found out it was cancelled and we had to fight to get any coverage back. That was our experience—it wasn't a good one."