Thankfully, Brandi got pregnant and had her son before she chose the Mirena IUD for birth control. After several ultrasounds, the Mirena was found - it had perforated Brandi’s uterus. 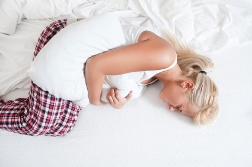 “We were thinking about having another child but I don’t know if that is going to happen now,” says Brandi. She isn’t alone. LawyersandSettlements recently interviewed a Canadian woman who blames Mirena for infertility and infection…

Brandi had several more ultrasounds and x-rays. During this time she was experiencing terrible cramps and backaches, but she thought this was normal because she’d had the Mirena years ago and had the same side effects. But one night wasn’t normal.

“I was lying in bed and had horrible abdominal pains - I had never felt anything like this before,” Brandi explains. “I went to the bathroom and it hurt so bad I fell off the toilet and passed out! I woke up on the bathroom floor. I went back to my gynecologist a few days later and explained what happened. I had an x-ray and it still wasn’t showing up. I had another x-ray and they thought they saw it but couldn’t be sure, so it was hit and miss. She decided to do surgery to find it.

“My gynecologist explained that she would try to find it through my vagina first, and if that didn’t work, I would have a laproscoptomy. When I woke from the surgery, she told me that the Mirena was found in the fatty tissue outside the uterus; it had perforated my uterus and then gotten stuck in this tissue.

“My doctors won’t go so far as to tell me that I will never have kids after this Mirena uterine perforation. I had to stay home for a week, I had to pay the doctor bills and my husband had to take his vacation at that time in order to be home and look after our son. I’m not the type of person to sue but I would like to be compensated for my medical bills at least. I certainly don’t want to get my doctor involved, she is wonderful. I don’t blame her, I blame Bayer, the maker of Mirena.”

According to Andrew Weil, M.D., perforations usually close up on their own, but in some cases they can cause bleeding or damage to other internal organs. If so, surgery may be required.

On his website, Dr. Sholes-Douglas, an obstetrician/gynecologist and fellow at the Arizona Center for Integrative Medicine, says that “A uterine perforation presents no risk of uterine rupture during pregnancy or any other threat to your health.” She didn’t mention whether or not it affects fertility.

More MIRENA IUD News
Meanwhile, The U.S. Judicial Panel on Multidistrict Litigation (JPML) in early April 2013 ordered that all federally filed Mirena lawsuits be transferred to the U.S. District Court, Southern District of New York, for pretrial proceedings. The Panel held that the Southern District of New York was the more appropriate venue because Bayer is located in New York, and its corporate affiliates are located nearby in New Jersey, Connecticut and Pennsylvania. As well as these Mirena federal lawsuits pending, dozens more have been filed in state courts nationwide.

According to the JPML, more than 40 Mirena lawsuits all claim that the Mirena IUD migrated away from its original position in the uterus and led to uterine perforations and other serious Mirena complications. As well, plaintiffs allege that Bayer Healthcare Pharmaceuticals failed to provide adequate warnings regarding the risk of device migration and related side effects.