Another Mirena IUD lawsuit filed last month joins more than 3,000 claims already filed in both federal and state courts against Bayer Healthcare Pharmaceuticals. And with more public awareness of Mirena complications, complaints are on the rise. 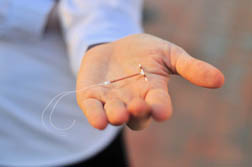 Julia had no idea that her infertility and infections could be associated with Mirena until she researched online - after getting nowhere with her doctor. “I have suffered three miscarriages following the use of the Mirena. I have had no problems conceiving previously - before I had the IUD,” Julia says in an e-mail. “Losing a baby early on is a very painful process with no explanation. But I think this Mirena is to blame.” When Julia insisted that the Mirena be removed, it had migrated to her uterine tissue and had to be surgically removed.

Bridget had an ectopic pregnancy while she had the Mirena. Ectopic pregnancy can be very dangerous for the mother and usually results in a miscarriage. It can also lead to infertility. “Fortunately I had my son before my doctor advised that I get off Yasmin and use the Mirena,” Bridget says. “I know about Yasmin and Yaz complications but getting this IUD was the biggest mistake of my life. The Mirena was embedded in my fallopian tubes. I had it removed three years ago and I have had two miscarriages. Now I wonder if my son will be an only child. I am a healthy woman - what else could account for this?”

More MIRENA IUD News
Both Julia and Bridget have filed complaints against Bayer. The latest Mirena lawsuit, filed in late September 2015 in the United States District Court for the Northern District of California, alleges severe physical, emotional and financial damages as a direct result of using the Mirena. Plaintiff Zabrinah Brown is seeking compensatory and punitive damages against Bayer. According to court documents, the Mirena IUD migrated and perforated her uterus less than a year after it was implanted. Because it was embedded in the tissues of her uterus, the Mirena had to be surgically removed. After surgery she developed sepsis - a life-threatening reaction to infection - and remained in the hospital for one month.

In addition to loss of earnings, medical bills and pain and suffering, Brown is also seeking punitive damages against Bayer for placing Mirena on the market with a “wanton reckless disregard for public safety.” The Case is 5:2015cv04333.

Although Bayer has included in the Mirena label that migration of the device may occur, it only refers to migration at the time of the IUD insertion. A common complaint amongst plaintiffs such as Zabrinah Brown, Julia and Bridget is spontaneous migration risks after insertion. Mirena lawsuits claim that Bayer’s claims regarding the safety of Mirena are misleading.