Did Mirena Complications Lead to Hysterectomy?

“I consider myself lucky that I had kids before getting the Mirena IUD for birth control,” says Laura. “Not long after I had the Mirena, abnormal cells showed up on my cervix - I am sure that was one of many Mirena side effects.” 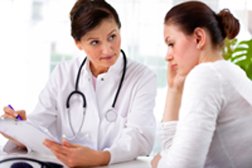 Laura had the Mirena implanted five years ago, and (surprisingly) endured discomfort and heavy bleeding for four years. “It actually cut my partner during sex so I went back to my doctor to find out if it was too long or in the right place,” she says. “Instead he referred me to a specialist. I had a biopsy, which showed the abnormal - but not cancerous - cells, and had the IUD removed. I have undergone two c-sections (I have two kids prior to getting the IUD) and they weren’t as painful as getting that IUD removed. When my doctor pulled it out, I thought he was pulling out my cervix. He said I would have a little cramping. I was in agony for more than a month afterward.”

Six months after its removal, Laura had another biopsy. This time she was told that she needed surgery to either have her cervix cauterized or removed because of the abnormal cells.

“About a week before surgery I had an appointment at my gynecologist’s office,” Laura explains. “She asked me some questions about the Mirena IUD. She wanted to know why it had to be removed and when I had it implanted. I told her that it caused constant pain and bleeding. We talked about my difficult periods with heavy bleeding and how the pain worsened after the IUD was removed.”

To Laura’s surprise, the gynecologist suggested that she have a complete hysterectomy - Laura was only 28 years old when she had her uterus and cervix removed.

“Honestly, even before I heard about Mirena lawsuits I told my friends not to have a Mirena because of my problems with it,” she says. “ And my partner had issues.

More MIRENA IUD News
“It infuriates me that I paid $350 for the Mirena and all the pain that came with it. And it possibly contributed to the hysterectomy. I was healthy before I had this device - I don’t know what happened to my body from the time it was implanted until now. What else could have caused these abnormal cells? If it was cancer, I would have a better understanding because cancer runs in my family; I was super vigilant about getting pap tests every six months.

“In the back of my mind I always thought Mirena was a factor. I asked a lot of questions about why this was happening but all I was told was that I needed to have my cervix removed. The gynecologist said that cauterization would only be a temporary fix and it could get worse, so she advised one surgery, and problem solved.

“I wasn’t heartbroken that I couldn’t have any more kids, but having that taken away is not comforting. It should be my choice, and not anything to do with a medical device maker.”