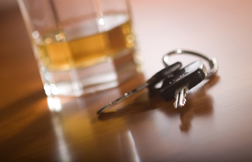 Joan Henderson, 54, reportedly received a two-year suspended sentence with probation for the April 2008 crash, which caused Michael Pacheco to suffer serious injuries, according to the news provider.

Queen's Bench Justice Brenda Keyser accepted Henderson's claim that her dangerous actions on the road were the result of taking Mirapex to treat her restless leg syndrome. Henderson claims that the drug led to some significant side effects including an "involuntary" disposition to gamble and drink alcohol.

"I'm satisfied that before this incident she wasn't a drinker at all," said Keyser. "This is not the normal situation of an upstanding citizen who has a bad day and chooses to drink. The drug she was taking caused her to drink compulsively that day."

Other less serious side effects of taking Mirapex can include nausea, dizziness, heartburn and loss of appetite, according to the National Center for Biotechnology Information.
READ ABOUT MIRAPEX COMPULSIVE GAMBLING LAWSUITS

Posted by
lisa
on April 14, 2015
Mirapex ruined my life. I got a divorce, dui,spending sprees, gained 70 pounds, lost house,depression, lost every job