Tales of Mirapex Gambling Direct from the Gutter

The stories are heartbreaking—the pain flowing from the pens and keyboards of real people who have been stung by Mirapex gambling. Pramipexole is indicated for the treatment of restless leg syndrome (RLS) and Parkinson's. A diagnosis of Parkinson's is bad enough. However, the words of Mirapex patients who have left comments with askapatient.com are compelling. 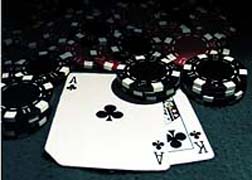 Mirapex compulsive behavior is but one of various adverse reactions associated with pramipexole. It works by stimulating dopamine production in the brain, in a fashion that is thought to minimize the effects of Parkinson's or RLS and slow its progression.

However, some go off the deep end of the Mirapex side effects pool.

"Doctors never knew, nor did they tell us about these side effects," the 60-year-old writes. "My wife was filing for divorce because of my behavior, which I was continually lying to her about because I could not stop, no matter what, until my wife looked this drug up on the Internet and read about side effects."

The author goes on to say that his wife called the doctor, and the Mirapex drug was soon stopped. While he doesn't explain the outcome of both stopping the medication or the fallout of his outrageous Mirapex behavior, he does offer, "I doubt we will ever recover from this."

More MIRAPEX COMPULSIVE GAMBLING News
This gentleman, age 55, did admit that Mirapex helped with the symptoms associated with Parkinson's—"but not worth the agony and hell incurred—stopped the drug and the problem stopped," he writes. "Wish I had known sooner what this drug could cause…"

This past fall the US Food & Drug Administration (FDA) announced that a number of generic drug manufacturers have received FDA approval for generic versions of Mirapex. That means that a drug linked to compulsive behavior is going to be increasingly available to a larger group of patients. Pramipexole, whether sold as Mirapex or generically, will continue to pose a risk for Mirapex compulsion. According to the Responsible Gambling Council, hundreds of Mirapex patients have consulted with a Mirapex lawyer with regard to their compulsion and the resulting damage.
READ ABOUT MIRAPEX COMPULSIVE GAMBLING LAWSUITS

Posted by
Debbie Broadway
on April 29, 2017
I recently found out about the law suits regarding Mirepex. I was told by a gambling counselor that it caused compulsive gambling. She told me to get off it immediately. This was before 2008. I lost my marriage, more money than I can admit, etc., etc. I still struggle with this addiction. I have contacted the attorneys recently. I don't know if it's too late to file on this.
Posted by
lisa
on February 29, 2016
is this lawsuit still going on?
Posted by
J Johnson
on December 6, 2014
I accidentally came across this on the Internet and instantly knew it was my problem too. I had no idea why I was acting the way I am. For some strange reason I was instantly addicted to gambling and although I didn't even want to be at the casino, I had to go. There was no reasoning with myself. The same with compulsive eating. Just have to do it. It has caused me very low moods where I cannot stand myself. I recently finished a month of rehab but I am still overcome with my addictions. I also have the side effect where I fall asleep during normal daytime activity. I have a very good job but have been in trouble for being sleepy on the job. It is all I can do to stay awake. I am desperately trying to find something else that will work for RLS. I get no sleep so I can't function which makes me continue taking Pramipexole. To make matters worse just before family intervention my pharmacist had changed my 4 .25 pills to 2 .5 pills without me knowing. The pills look alike so for a month and a half I was take twice as many pills as I shoukd have. It was obvious that my behaviour was even worse during that time. I have been taking pramipexole since December 2007.
Posted by
Cindi Eastman
on August 19, 2014
I was on Mirapex for about 2 years and developed multiple addictions to hobbies I had never done beforel including crocheting, guitar playing and sewing. Seemingly harmless except for the thousands of dollars spent on yarn, hooks, sewing machines, material, guitars etc. I never slept. I felt as if I was waisting precious time sleeping when I could be making something or practicing guitar until my fingers were so sore I couldn't bare it. I would try to put band aids or tape .on my fingers so I could play more. Or I would crochet compulsory for 12 to 14 hours straight without stopping. The problems were not contained to these " hobbies". The shopping addiction was out of control. I always needed to order something. Getting a package on the porch was like getting high. My husband used to joke that he was on the first name basis with the Fed ex guy. But we aren't laughing anymore. I also developed addictive inappropriate attachments to people that nearly destroyed my marriage and those friendships. We lost 3 cars in a BK , cashed out our retirements, have sold what we can to try to keep afloat. I've been weaned off of Mirapex, completely off for just over 1 week and I feel like I've woken from a bad dream. It's al over; done but what a path of destruction is behind me. I almost lost my marriage. I contacted one of these internet lawyers and told my ENTIRE story to. Some of it too embarrassing to post on here, but theyhaven't returned my call. I don't know what to do
Posted by
Michael Leali
on March 12, 2014
Nancy, I too have had the same issue with Mirapex. I have lost almost as much as you have and lost my job because of it. I started taking it in August of 2012 and the Doctor never told me of the side effects. I having been trying to find a lawyer that will file a lawsuit. This is ridicules. If you look on ace book and look up my name I have a group set-up for people that have that have been victimized by this drug. I will also try to find you on Facebook.
Posted by
Nancy Marshall
on March 4, 2014
My name is Nancy Marshall. I am 60yrs old. I started taking mirepex for restless legs in 2005. I started gambling online in about 2011. I live about 5 miles from a casino so I started going there. I could not make myself stop going. I physically would get sick. I would shake and it was like going into another world, someone else's body. At one time I thought of suicide. I have lost over $300,000 have a second mortgage on our home of $115,000 and we are living from week to week. I was in the hospital at Thanksgiving time 2013 when a nurse brought in my night time medication. My daughter was there and recognized this medication when the nurse called out the name. She told me to stop taking it right away. She said there were lawsuits against this drug because of what it has causedy