In Debt Thanks to Mirapex, with Time Running Out

Mirapex, a medication widely prescribed for Parkinson's, has become associated with compulsive gambling, a behavior that was was once described variously as a vice, a temptation, a human failing. But we now have a pretty good idea that certain meds can drive you to it, too. 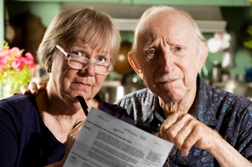 Take the story of Betty, who recently wrote into a debt blog with this heart-wrenching story:

"I get $729 a month from [Social Security]. That is my only income. I have never been so undisciplined in my life as the last 7 years with each year getting worse. I am on mirapex (sic) for my Parkinsons and even though I know shopping, and gambling are 2 of the many problems associated with this drug I still convince myself its OK for me to do it because somebody wins and another dollar or more is needed to win or buy something."

Betty explains that thanks to Mirapex and compulsive gambling, she was at the time of writing $31,000 in debt to credit cards and a personal loan. Betty wondered aloud who might lend her $25,000 dollars unsecured.

"Capital one did… I told my husband of my problem and he cried."

Betty is 68 and her husband is 82. Both are well beyond their peak earning years, and while Betty does not disclose her husband's financial status, his reaction to Betty's admission speaks volumes about the reality of Mirapex side effects in this case.

More MIRAPEX COMPULSIVE GAMBLING News
"Do we have to get a divorce if I file bankruptcy?" she asks. "Or how can I make sure they can't take our house without a divorce? My medical bills average out to $300 a month."

The Mirapex compulsive behavior victim indicated that she also ran up a balance of $8,700 on another credit card.

Mirapex, a dopamine agonist, was approved in 1997 by the US Food and Drug Administration (FDA) for the treatment of idiopathic Parkinson's. Among the various side effects linked to Mirapex is compulsive behavior. In similar fashion to the restless leg syndrome (RLS) Mirapex is designed to treat, the mind appears to descend into an uncontrollable restlessness that can only be satiated by behaviors like gambling and shopping. Some patients have been reduced to more serious and socially vilified behaviors such as compulsive sexual behavior.
READ ABOUT MIRAPEX COMPULSIVE GAMBLING LAWSUITS

If you have suffered losses in this case, please send your complaint to a lawyer who will review your possible [Mirapex Compulsive Gambling Lawsuit] at no cost or obligation.
Request Legal Help Now

Posted by
Gabino S Munoz
on October 14, 2016
I have been taking Mirapex or its generic version Pramipexole For over 10 years for Parkinson's. With the exception of office pools, lotto and friendly penny ante card games I had not been interested in gambling. My wages were never great enough to permit me to partake in extravagant shopping sprees or gambling escapades. I was known as frugal and tight with my funds. Over the last 9+ years I have moved nine times, one step ahead of evictions because I'd spent part if not all of the rent money. I have had 5 vehicles reposessed, the payment spent at casinos, but that didn't stop me as I started using taxis to get there. I can go on and on with how my life has changed due to gambling. So I ask you, can someone help?
Posted by
Wayne lankford
on December 28, 2015
I have been taking mirapex about 12 yrs, before that I had gambled a little but never had a problem with it, played cards with the guys and bought very few lotto tickets, I had even been to a casino with friends and just wasn't interested in gambling, about 5 yrs ago I went to casino and did play the slot machines, after almost $300,000 later (not all my money) $180,000 was mine I had in chase bank investments hardly touched it until I started gambling, at the same time I was spending that I had 5 credit cards I maxed out and wrote 4,000 worth of hot checks at casinos,,,,, Can you help are refer someone who can ? Thank You
Posted by
Betty hite
on February 12, 2015
I need help locating legal advise due to gambling and compulsive behavior due to Mirapex.