A Rhode Island man who received recalled abdominal mesh just prior to a product recall in 2005, will see his surgical mesh lawsuit go forward after a Rhode Island judge refused to dismiss the case. 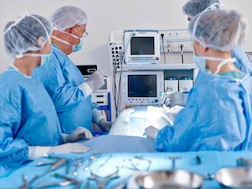 According to court documents Wayne Smith received the Composix Kugel Hernia patch abdominal mesh for repair of a ventral hernia. Not long after surgery, according to documents, the plaintiff began experiencing severe abdominal pain, together with tenderness at the surgical site.

As it turned out, the manufacturer of the abdominal mesh product, Davol Inc. (a subsidiary of C.R. Bard), triggered a series of recalls for its Composix Kugel mesh due to problems with the so-called ‘memory ring’ used to deploy the patch inside the body by way of minimally-invasive surgery. Following several reports of the memory ring, which was made of plastic, splintering and migrating away from the surgical site – along with reports of intestinal fistulae, bowel perforation and in some cases, death – Davol recalled the mesh.

The recall was classified, in December 2005 as a Class 1 recall, the highest level of recall observed by the US Food and Drug Administration (FDA), given the risk of serious surgical mesh complications.

Plaintiff Wayne Smith consulted his surgeon, who recommended the abdominal patch be removed. The explantation would have involved a second surgical procedure, within close proximity to the first.

More SURGICAL MESH News
Smith’s mesh lawsuit further asserted that the abdominal mesh was defective at the point when it left Davol’s immediate control, as well as a claim that the mesh posed a serious threat to the consumer.

Davol and C.R. Bard attempted to have the abdominal mesh lawsuit dismissed, asserting that Smith’s claims failed to satisfy Rhode Island law. The judge in the case, Alice B. Gibney disagreed with the defendants, noting that in her view the plaintiff’s claims satisfied Rhode Island law, and that there were sufficient grounds to support an allegation that a defect was the proximate cause of the man’s injury.

Posted by
BRIAN PAULSON
on September 20, 2017
I had the exact thing happen to me. In late 2004 I had a large ingral hernia and a surgeon performed a double large mesh surgery in January 2005 .. it ruptured within 48 hours and I am still having complications from it .. someone please help thanks
Posted by
Heidi Newgard
on May 1, 2017
In 2005 I had an abdominal hernia repaired and in 2007 it broke open by belly button and was infected went tore and put in hospital they did surgery and removed post of mesh but not all it was alright for awhile but a few years back stated drawing from belly button again .im allergic to the mesh and don't have money for surgery again so I live with the pain and infection
Posted by
Janie Thornhill
on March 21, 2017
My mother has had one mesh removed and another put in that is also a recall and is getting the run around by her lawyers. The second mesh is killing her, does anyone have any kind of suggestions. She needs help medically and legally. She is going to end up dying if she doesn't get the help she needs.
Posted by
Rolando Gomez
on January 19, 2017
Synthetic surgical mesh is a serious problem and I've been putting together a website to provide some information, but more important to gather information and bring this to the public. Of note, we've put two things on this website, a voluntary database to collect information on those that suffer, but it also as an "FDA Live" that updates weekly with mesh adverse events reported to the FDA. Feel free to use this as it's data purged through the FDA's API, straight from the source.
Posted by
Timothy Benton
on January 3, 2017
Had the same procedure done, everyone told me there was nothing I could do with it. Had this done during surgery on my gall bladder, put in the mesh when done and stapled up, to this day still ave infection and abscess problems and it is still painful and tender.
Posted by
Brenda Patks
on January 1, 2017
I had surgical mesh put in 2004. That same year I had to go back in the mesh was cutting up my vagina. Since then 3 more surgeries...I am incontinent again.
Posted by
Any Rawdon
on January 1, 2017
I have suffered with my stomach since i had my surgery in 2005 and it has gotten painful at times as well i never had the money to get it checked out by a doctor that deals with hernias but i have told my doctor of my stomach problems