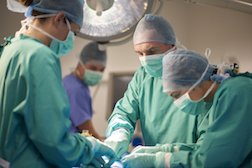 Surgical mesh came under fire several years ago, beginning with the Kugel mesh complaints. All those lawsuits have been settled but new meshes have been introduced that seem to be a repeat performance. “These newer surgical meshes have been approved despite their defective design,” explains Malik. “They are causing infection because the hard mesh acts as a bacterial breeding ground.”

Why do mesh manufacturers continue to use plastic materials with a track record of failure? The Ethicon Physiomesh is made from polypropylene: “plastic-like” non-absorbable fibers sandwiched between two layers of polyglecaprone, a synthetic absorbable suture. An Ethicon mesh lawsuit filed by a woman in Florida alleges that the product “prevented adequate incorporation of the mesh into the body and caused or contributed to an intense inflammatory and chronic foreign body response.”

“Medical device companies are looking for scaffolding material to repair hernias. A variety of products are available, however companies continue to produce mesh knowing they may be defective,” says Malik. “Both Atrium and Ethicon fall short of the mark.”

Atrium C-QUR Mesh
Fish oil is purported to have health benefits when digested, but it apparently doesn’t work so well when placed inside the body. (It is advertised as an “anti-adhesion barrier” to prevent scar-tissue from attaching organs together during the healing process, which can happen after hernia surgery.)

Case in point: Hernia Mesh called Atrium C-QUR, which is the only hernia mesh implant on the market coated in fish oil. And it was approved by the FDA in 2006 by the 501k process—without clinical trials—because it was “equivalent’ to other hernia mesh implants already approved.

But Atrium quietly recalled its mesh in 2013 and by December 2016, about two dozen C-QUR lawsuits had been filed. Hernia patients allege that the fish oil peeled off inside their body. According to the Daily Hornet, Atrium didn’t remove its C-QUR from the market, Instead, the company sent out a recall letter with a warning that the mesh, if exposed to “excessive humidity for an extended period of time” (in the human body?) could allow the coating on the mesh to “strongly adhere to the inner handling sleeve”.

More SURGICAL MESH News
Malik says that Ethicon has one lawsuit slated for January 2018. “This year will comprise discovery and deposition, but we are already seeing similar volume as the transvaginal mesh debacle,” says Malik. “These meshes are commonly used for hernia surgery, by both men and women, and are used even more than transvaginal mesh. So I anticipate these mesh lawsuits to have the same scope and scale as the TVM lawsuits.”

If you have been implanted with surgical mesh, particularly Ethicon Physiomesh, Malik advises that you follow up with your implanting surgeon—even if you aren’t experiencing any symptoms of mesh side effects. “If you need to have the mesh removed do it sooner than later because the statute of limitations is running,” he adds. If you get the mesh removed, make sure to obtain the implanting record, product ID explanation and your medical record. “There is still time to seek legal help.”

Posted by
Karla Lynch
on January 23, 2017
I had left inguinal hernia repair over 20 years ago. I have been complaining to my doctors about pain there again, but I thought it was probably due to scar tissue and/or the Endometriosis that I have had. My doctor's have more or less told me I have to live with the pain, because they won't do surgery if it's just scar tissue; saying that more surgery will only cause more scar tissue. And, because I am post-menopause now, they say the Endometriosis should get better. Now I am wondering if it could actually be the hernia mesh. Also, when I had my first colonoscopy almost 5 years ago, I was in so much pain they had to put me completely out under with anesthesia. Now I wonder if the mesh has attached itself to my bowel, and that is what caused the pain, which lasted about a week and I even had bruising. I can't even sleep on that side for long, due to the pain felt. Please advise.

Posted by
Jerry Smith
on January 23, 2017
I had hernia surgery and have never really felt right or OK since and that was in march of 2015 I think. I don't know what kind of mesh they used but I don't have thousands of dollars to go back and have all this redone and the time off of work. What can I do in this case????
Posted by
James Thorpe
on January 22, 2017
The mesh that was put in me in 2016 to repair my hernia seems to me moving around in my body and the pain where it was put in is unbearable when I fasten most of my pants, so I had to start wearing suspenders. It hurts to bend over.