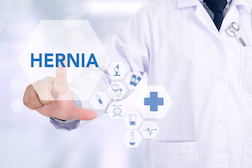 surgical abdominal mesh says that mesh complications are an “epidemic”. Dr. John Morrison says it's going to get worse because almost all hernias are now repaired with mesh. And some products are brought to market without proper research or clinical trials.

Hernia repair is a common surgical procedure, with approximately 80,000 people having such procedures in Canada each year, and about 20 million worldwide. But about 15 percent of abdominal hernia patients develop complications and severe pain, often from a complication associated with the mesh itself. Since 2000, Health Canada has recalled or removed 12 brands of hernia mesh from the market, mainly due to reports of infection or perforation.

In Canada there have been 185 reports of serious injury and other complications, including three deaths. "The mesh can erode into other organs over a period of time,” Dr Morrison told CTV News, adding that studies show 10-20 percent of hernia patients are left with chronic pain. Part of Morrison’s practice involves removing plastic mesh that has migrated and punctured organs. He has seen mesh move into the bladder and stomach, and says that many young people (the average age of developing a hernia is 50) have become incapacitated.

Morrison--and other experts-- says the mesh material is the major reason for so many complications and subsequent recalls. It’s unfathomable that medical device companies are allowed to market products that haven’t changed much since kugel mesh in 1996 was approved: a hernia patch made of plastic chemical polymer with a ring around the patch that would break and move into the patient’s skin or organs and cause horrific pain and complications. Some people even died. But new and so-called improved hernia patches are approved by the FDA’s 501K process, meaning they don’t need to go through clinical trials because the product is similar to a device already on the market, such as kugel mesh!

More SURGICAL MESH News
A wrongful death lawsuit has been filed against Atrium, the maker of Secure Mesh. This hernia mesh product was coated with Omega 3 acids, or fish oil, that caused severe reactions leading to infection and adhesions, and allegedly death. Secure mesh did go through clinical trials, but with rats rather than humans. Two of the 18 rats implanted with Atrium’s mesh died.

Another mesh product called Physiomesh (made by Ethicon, a subsidiary of Johnson & Johnson) was recalled in 2016 after about 650 adverse event reports filed with the FDA’s Manufacturer and User Facility Device Experience (MAUDE) database. Given the number of Physiomesh devices sold worldwide (over 330,000) hundreds of lawsuits are expected.

Despite these outcomes and recalls, companies like Ethicon and Atrium are still putting products on the market through the 501k process. And abdominal mesh lawsuits are expected to equal or even outnumber transvaginal mesh lawsuits.