Given the amount of recent complaints following hernia repair surgery, abdominal mesh complications could soon equal, or even surpass, transvaginal mesh complaints, of which more than 100,000 lawsuits have been filed. 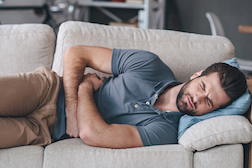 Despite reports questioning the benefits of abdominal mesh, and studies indicating the risks may outweigh the benefits, mesh manufacturers continue to sell possibly defective hernia mesh and doctors continue to perform hernia mesh surgeries. (A study published last October in JAMA concluded that the “benefits attributable to mesh are offset in part by mesh-related complications”.) And too many people with hernia implants are suffering, some for a number of years.

Steve (not his real name) had hernia repair surgery six years ago and says he has been in extreme pain ever since. “I’ve had many trips to the ER with recurring infections. It gets so bad that I can’t urinate or have bowel movements,” he says. “This is a terrible way to live. I’ve already had two more surgeries to remove the mesh, to no avail.”

“The day after my hernia surgery I felt pain but my doctor told me it would go away. Wrong. I had to have another surgery and they found the mesh all caught up in my intestines,” says Connie (not her real name). “That was two years ago and I get spasms in my abdomen all the time.”

And another complaint from Juan in California. “I had a hernia operation back in 2010, where a surgical mesh was used in the surgery and I incurred infections, recurrence of the hernia, more surgery to correct the problem plus lengthy recuperations in the hospital and at home,” says Juan. “After the second operation performed by another surgeon, he told me that the mesh was stuck to the inside of my abdomen and that he had to literally scrape it off. The second surgeon also told me that this mesh was the largest piece of repair material he had ever seen. I believe this mesh was defective but no one is admitting it.”

More SURGICAL MESH News
Juan is probably correct in his belief that the mesh is defective. As well, the type of surgery he had probably should not have been repaired with large pieces of mesh. As for mesh infections, nearly all hernia mesh needs to be completely removed to eradicate infection. According to the Mesh News Desk, hernia mesh infections are extremely difficult to cure, because the infection develops into a biofilm, which functions as an ecosystem of bacteria covering the entire mesh. And the US National Library of Medicine reports that mesh-related complications have become increasingly more frequent. “Antibiotics and mesh-saving operations are not sufficient to eradicate the infection in the majority of cases.”

If you have been implanted with a hernia mesh and have pain and/or infection, you might want to seek legal help.
READ ABOUT SURGICAL MESH LAWSUITS

Posted by
bob
on February 11, 2017
after having hernia repair using mesh, i have been impotant. can this be caused by the mesh or a mistake in surgery? i also get sharp pains down it that area from time to time.
Posted by
carleen williams
on February 10, 2017
hi i had mesh put in my stomach after having a gasto banding and my inside had all dropped all i knew is that used mesh to hold it up ,3months later end back in hospital i couldnt even keep ice block down,so they took the band out,a few years later i ask for it to be put back in but said they couldnt put it back in as had to much scaring going on so have been open up three time in one stop but over the years my stomach has got worse ,and cant go to toliet gets very hard or other way around because i have lost about 10/15kg my stomache sags and hurts to walk when im full my stomach chest is often very sore i live on a lot of pain killers which doesnt help either as i had spinal fusion when i was 21 im not 55 have a new doctor ,and for years i have though a lot of my pain under might right breast is beacuse of the mesh,know sure if its the same stuff but my operation where dont a flinders medical centre in adelaide south australia