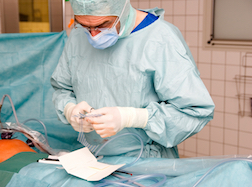 In May 2016, the Ethicon Physiomesh Flexible Composite Mesh products were voluntarily withdrawn by the company after two unpublished studies suggested the medical implants had higher failure rates than other mesh products available on the market. Ethicon gave medical professionals up to September 16, 2016, to return unused products for a full refund. According to the withdrawal issued by Ethicon, "The recurrence/reoperation rates (respectively) after laparoscopic ventral hernia repair using ETHICON PHYSIOMESH™ Composite Mesh were higher than the average rates of the comparator set of meshes among patients in these registries."

The Physiomesh composite mesh was designed for use in laparoscopic hernia surgeries, including ventral and inguinal hernia repair. It is made of polypropylene, which has also been used in transvaginal mesh. According to Dr. Shezad Malik, founder of the Dr. Shezad Malik Law Firm, lawsuits have already been filed by patients who allege they were harmed by Ethicon's Physiomesh composite mesh.

"There were two big studies done, one involving the German Medical Registry and one involving the Danish Medical Registry," Dr. Malik says. "Compared with other available meshes, the Ethicon Physiomesh was shown to fail earlier than the other options on the market. Patients are reportedly experiencing more side effects. Ethicon says it is unclear what is going on, but they're saying it could be because of the patient or the physician or a host of as yet unidentified causes."

At issue is the mesh breaking down too early, which can allow hernias to recur, or can cause bacterial infections, damage to the internal organs, and the need to redo the surgery. Patients who have the Physiomesh implanted are encouraged to follow up with their doctors to ensure there are no problems with their mesh.

Symptoms of mesh failure include recurrence of the hernia, bacterial infection—marked by fever and chills—pain or swelling at the operative site, fluid-filled abscesses in the abdomen and groin, and perforation of the organs or blood vessels. Patients who have had laparoscopic hernia surgery and are not sure what mesh device was used can ask their surgeons for the operative report, request their medical records from the hospital or clinic, or look through billing records to see if the mesh is listed as a line item.

More SURGICAL MESH News
Patients who have suffered a hernia, had the Ethicon Physiomesh implanted, and suffered adverse effects as a result of that Physiomesh may be eligible to file a lawsuit against the medical device company. A few lawsuits have already been filed with the first trial reportedly expected in 2018.

The withdrawal does not involve the Physiomesh Open product, which was approved more recently than the Flexible Composite Mesh.

"In 2014, Johnson & Johnson came out with the Physiomesh Open, went through the controversial 510(k) process, which bypasses rigorous safety data testing, and had it rubberstamped by the FDA," Dr. Malik says. "The company brought the replacement device in and after more problems were reported with the original, they withdrew the older model knowing they had a replacement in the wings."

Posted by
Erik Webb
on November 15, 2016
My name is Erik Webb I'm from Oxnard California I recently had a hernia repair in April and I am suffering from every symptom listed on this document. I made numerous doctors visits. I have been to the ER numerous times. I have been told to go to primary care physician and or surgeon that perform my procedure to look at the mesh. Ive been a told I'm fine, you just having anxiety. While I'm in excruciating pain. All on my right side of my abdomen, pelvic region, down my leg, lower back, pressure in the rectum, erectile dysfunction, painful ejaculation. I have a bulge like a ball extremely painful on the side where my procedure was performed. Ive thought I had bacterial infection. MRIs, ultrasounds, CT scan everything is clear but I'm excruciating pain. I taken numerous blood test, urine samples no one seems to know what's wrong with me very frustrating. I am suffering severely from this and seem helpless. Causing me to have hypertension, urine incontinence. I've been prescribed antibiotics Epididymitis and varicose veins which there isn't any antibiotics for varicose vein. I've been given the runaround, while being in pain causing other health problems. Now I know exactly problem please help thank you.