Lorna P., one of many hernia mesh victims, is hopeful that she will receive compensation after hearing that the jury in the second C.R. Bard bellwether trial awarded $255,000 to a man allegedly injured by C.R. Bard’s hernia mesh. 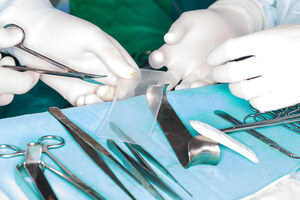 Lorna (not her real name pending a lawsuit) had her first hernia mesh surgery in 2000, then another and yet another revision surgery. Her health spiraled downhill – to the point that she was sent to a pain clinic and became addicted to opiates. “My second hernia mesh surgery almost ten years later didn’t help the pain because my doctor told me some of the mesh couldn’t be removed – it had moved and some bits had twisted into my intestines,” she says. “I saw another doctor in 2012 who performed revision surgery; he was able to remove most of the mesh that had attached to my stomach and bladder but he couldn’t remove all the damage it caused.”

Putting a Band-Aid on a Bullet Wound


Neither could Lorna’s doctor help get her life back. After the first hernia mesh surgery Lorna tried to ease her chronic pain with acupuncture and physical therapy but she says it was like “putting a band-aid on a bullet wound”. She was sent to a pain clinic where Percodan, an opioid analgesic was prescribed. “Living with so much pain and being addicted to opiates ultimately ruined my marriage and even my family became estranged because they wouldn’t believe that I was in so much pain,” she says. The addiction also caused her to become unemployed and for a long time she was pretty much living day-to-day.

Incredibly, her health got worse. According to a study at the University of Alberta, surgical mesh may cause autoimmune disorders. Forty patients with mesh implants were studied and almost all of them had symptoms such as chronic fatigue, cognitive impairment known as "brain fog," muscle and joint pain "fibromyalgia," feverish temperature, and dry eyes and dry mouth. "Of those patients, 45 per cent developed an autoimmune disorder such as lupus or rheumatoid arthritis. And in the patients who had allergies before the implant, they were significantly worse after,” said director Jan Willem Cohen Tervaert. And researchers Kristoffer Andresen and Jacob Rosenberg at the University of Copenhagen in Denmark found that hernia mesh cause an inflammatory response that causes pain for three to six months after surgery.

Lorna was diagnosed with numerous autoimmune diseases just after her mesh revision surgery.


In April 2022 the jury in Bard’s second bellwether trial found its Ventralex hernia mesh was defectively designed and unreasonably dangerous. “This is the first time in the 14-year history of various hernia mesh litigations that any jury ever has found for a plaintiff on a design defect theory,” said Antonio Milanesi’s attorney, Tim O’Brien. Antonio Milanesi and his wife Alicia Morz De Milanesi, of Pensacola brought the case against C.R. Bard after Antonio had to undergo revision surgery in 2017. According to the complaint, Milanesi developed a high grade post-operative bowel obstruction, which required a third surgery.

The couple in the MDL, like Lorna and countless other hernia mesh victims, claim the polypropylene material in the mesh devices degrades when implanted in human tissue, which is due to defective design. As well, they argued that Bard, the Ventralex maker knew their mesh products were defective but marketed and sold the devices without warning of the risks.

According to the verdict, the jury sided with Antonio Milanesi on his negligence — design defect claim on the 18th day of trial. However, it rejected Milanesi's strict products liability, failure to warn, negligent misrepresentation and fraudulent misrepresentation claims. It did, however, award Antonio Milanesi’s wife $5,000 in loss of consortium damages. "What the jury told them back is that the Ventralex hernia patch is both defectively designed and dangerous," attorney O'Brien told Law360. “We are proud of the Milanesis for having the courage to take on this behemoth and issue this very important verdict."

More SURGICAL MESH News
This is Bard’s first loss in multidistrict litigation alleging defects in the Bard’s hernia mesh products. Milanesi's case is part of the third biggest MDL in the country with nearly 16,700 pending cases over the Bard products, according to the MDL Judicial Panel. Bard subsidiary Davol Inc. was also a defendant in Milanesi's case.