Medtronic: It's Not Just Sprint Fidelis

Sandy Wells never had an implantable cardiac defibrillator with defective Medtronic Sprint Fidelis leads in her body. That's the good news. The bad news is that she did have a Medtronic Synergy neurostimulator implanted under her arm in hopes of relieving her chronic migraine headaches.

The unsurprising news is that, like the Sprint Fidelis, her device's leads failed.

Wells (not her real name pending legal action) suffers from myofascial pain syndrome. "It's not really a normal migraine," she explains. "In my case, the occipital nerve was covered by muscle, so the nerve was being smothered by the muscle and causing me pain that shot from the neck up to the sides of the head and forehead. Every migraine medicine I tried hadn't worked; it's not treatable by normal methods. 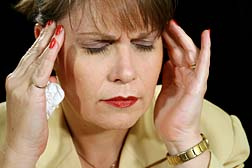 "I was seeing a doctor for this syndrome. At that time, I had had five years of being clean and sober and I chose to take no pain medicines. At first, he tried giving me injections and pain blockers for the neck and then down the back several times a month, but it wasn't working. So he suggested using an implantable nerve stimulator."

Wells had the Medtronic Synergy implanted in July 2004 after a two-week trial with an external device. The implantable device was placed under her arm near the right breast, with two leads running from the device up either side of her neck to stimulate the occipital nerve. She also received an external remote control that was supposed to allow her to control the strength and frequency of nerve stimulation.

"When it worked, it worked," Wells says, "but it only worked for the first few weeks I had it in. After that, it never worked correctly. After the external trial, they cut me open and implanted the battery pack under my right arm, which was quite painful. Three or four weeks later it fizzed out—one of the leads broke. I turned it on and fizz! it broke. They had to replace all the wiring and the left lead. That meant they had to cut me open and shave my head again.

"Then six months later the right lead broke, so I had to go in and have all that repaired again. I had had a hysterectomy and abscess surgery and had lost thirty or forty pounds, and as a result, the right lead moved and broke and I had to go back again. My surgeon cut me open a little further down and sewed the lead in so it wouldn't move again.

"Every time I've gone in, they've had to cut my neck open and shave my head. I had to be awake during the procedure with only topical numbing, so every time I had to feel the surgeon ramming these leads into the back of my neck. I've been cut open and shaved six times.

"The last time, the battery pack implanted under my right arm right behind the right breast failed. I'm covered with painful scar tissue, some on the shoulder, some on the back. The remote control never worked. It would only shoot up high or low, but it couldn't be controlled.

"Medtronic representatives were present every time I went in; they tried to reprogram the remote, but it still never worked. They Medtronic people had no idea why it didn't work. They pretty much threw up their hands and gave up trying.

"When I changed jobs, I received a new insurance policy and had to change to a different doctor, who asked me why in the heck I had this thing in there. I hadn't used it for four months, because it was causing me more pain than it relieved. I finally had it taken out in a sixth surgery in October 2006. All this in a matter of two years.

"I feel that Medtronic should have sat me down and explained that there was a 50-50 chance that this device wouldn't work and that it could cause nerve damage. Would any smart person consent to have this implanted if they that? I was having terrible pain from the myofascial syndrome before and I really needed relief, but don't think that I would have had something implanted in me that could cause this kind of nerve damage. I mean, who wants to be cut open six times and have scarring?

More News
"I'm in the process of taking legal action against Medtronic. I'm scarred for life, literally scarred for life. I haven't been able to work since January 2007. I'm a bookkeeper, and right now I can't sit at a computer for more than 15 or 20 minutes without being in severe pain.

"I just don't think that Medtronic is taking people's well-being into account. I know that people have died because of their products malfunctioning. I don't think they did enough studies or enough work on the design of these devices. The battery pack for my stimulator was huge, about two by three inches, and they wanted to implant it on my hip, where it would have stuck out; even when I had it implanted under my arm, it still stuck out. You can see where it used to be under my arm; the tissue's still messed up. I have terrible neck pain now. I'd take the headaches over what I have now."

Posted by
Carol
on August 14, 2015
Dear yours truly, I too had a ONS, and had the same thing happen to me. I found out later that they put in some kind of plastic spacers in or between your vertebrae maybe thoracic. And then I had a nice huge one in my lunar spine which damaged my spinal processes when they took it out. I'm not sure what they do too your cervical spine, that's where the electrodes are and there's a hook. There are usually two loops in the wire for movement. One in the cervical region and one in the thoracic. That's about all I know. But you can probably u tube the operation. I've done that before fore different ones. Good luck. Hope u feel better, Carol
Posted by
Yours Truely
on December 8, 2014
i had occipital nerve stimulator also. Went through many surgeries. If only the first one didn't get infected after 2nd week. Nothing really worked well after. Had electrodes replaced total of three times . Battery packs two or three times. One infection. This last time I needed it removed due to pain. I'm not sure what happened though. Still trying to figure it out. The back of my neck is really messed up where wire was. My neck feels all crunchy. It pops and crunches when I turn it????. There feels like there are indentations in the back of my cervical spine. I'm having a hard time with lower back too. But with all that scare tissue and wires so close to spine, I have no clue what to expect, and am pretty scared to find out. Yours truly. P.S. No, I wasn't informed I'd have to have so many revisions. I was told one or two maybe????. That was ok. But all the possible damage, not at all, yours truly
Posted by
Lisa
on December 9, 2011
I also have had problems with my medtronic implant. My Dr. raved on how it would stop my chronic headaches due to nerve damage from having several cerival surgies. The first implant worked for six months until I was in a car accident that didn't hurt anyone but me. Immediatley after the minor impact I could tell that the leads have moved in my head. I also had to undergo another surgery (day surgery, semi awake) where they shave hald your head, cut about 6 inched along the side of my head, put a connector in my upper back (because the wires didn't reach the battery) had another cut a little lower on my back and then a 5 inch incision on my upper butt. The stimulator has never worked since they put the new one in. The area where the battery is always sore, The dr's have to be careful whenever I have shots for my pain because of the leads. I would love to get it out but after 13 surgeries just the thought of going through that pain again makes me sick. You put your total trust inthese Dr's that are supposed to be the BEST in their field to find out that you were just a guinea pig.