In February 2004, Bergstrom had his first Medtronic defibrillator implanted to help with his heart rhythm. That one failed so a second defibrillator, this one with Sprint Fidelis Leads, was implanted in July 2005. That defibrillator seemed to work fine, until March 6, 2007, when Bergstrom experienced his first shocks.

At the time, Bergstrom experienced three shocks in fifteen minutes. He was taken to the hospital for examination, where he was told that the problem was not his defibrillator. "One of Medtronic's people told me that there was some noise in my leads, but that there was nothing to worry about," Bergstrom says. "They said that the defibrillator was fine and it should be left alone. The doctors then thought the problem must have been my heart so they gave me medication to slow down my heart rate. I even had a periodic check up the week before my latest incident and I was told there was a defect in the leads but they should be left alone." 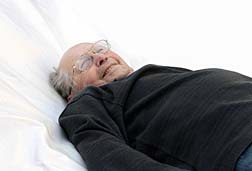 However, despite telling Bergstrom that his defibrillator was fine and should be left alone, by March 2007 Medtronic had already received a letter from the Minneapolis Heart Institute informing the company about lead failure and the Institute's decision to no longer implant the leads. That letter was sent in February and should have been enough to convince Medtronic that defective leads needed to be removed. Unfortunately for Bergstrom, his leads were left implanted, leading to his horrible ordeal.

At 4:00 AM on July 28, Bergstrom's defibrillator began administering the first of 32 shocks. "I was sound asleep when it started," Bergstrom says. "It gave me over 30 shocks, one after the other. They were all full-power shocks. It was very painful. There's nothing anyone can do to help you when the defibrillator is going off. All my family could do was stand there and watch me crawling on the floor in pain until the ambulance arrived. I should have died..."

"I just think they should have told me in March about the problems with the leads," Bergstrom says. "I'm lucky to be alive. My heart rate wasn't off; the defibrillator misfired. I shouldn't have had to go through that."