The largest player in the implantable heart defibrillator market announced yesterday that it is halting sales of the Sprint Fidelis lead, a wire that connects the Medtronic defibrillator to the heart, after it was determined the leads could be potentially defective.

Medtronic is also urging doctors to stop using the Fidelis lead after hundreds of incidence reports pointing to potential malfunctions. The product is suspected in contributing to five deaths.

The lead is prone to developing hairline fractures, which has the potential to misread heart rhythms, which is critical to the defibrillator's operation. A fracture in the lead could cause the defibrillator to malfunction in two ways: by delivering an unnecessary, and often extremely painful shock to the heart when it isn't needed, or failure to deliver a critical impulse to the heart to restore proper rhythm.

Pacemakers are not affected. 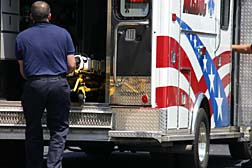 Medtronic says in the October 15th edition of the New York Times that it has stopped selling the fracture-prone leads, and will be recalling leads already out in the market, ensuring they will not be implanted from hereon in.

It is estimated that 235,000 patients could be affected. This number represents patients who received a Medtronic defibrillator since 2004. Patients receiving a Medtronic defibrillator prior to that time should not be affected - nor would those who initially had a defibrillator implanted prior to 2004, but may have had a replacement since that time. In this situation, it is common for doctors to use an existing lead, rather than replace the wire. The latter involves delicate surgery, and considered a higher risk than simply replacing the device itself.

It's for this reason that patients carrying the affected lead consult their doctor to determine the best response. Medtronic claims that defibrillators can be re-programmed to mitigate the potential for problems. Still, the manufacturer estimates that 2.3 per cent of patients fitted with the Fidelis lead would experience a fracture within 30 months of implantation. That figure translates to anywhere between 4,000 and 5,000 individuals that will be required to undergo the delicate and risky surgery needed to replace the fracture-prone lead.

Medtronic has announced that it will cover the cost of the faulty lead, and contribute up to $800 worth of medical costs not covered by insurance. However, the manufacturer will not cover the cost of replacing a functioning lead. In this way, the patient would have to foot the entire bill for his peace of mind.

While the U.S. Food and Drug Administration (FDA) and the medical industry is applauding the voluntary recall as timely and responsible, it's been several months since suspicion about the faulty Fidelis lead first surfaced.

Earlier this year Dr. Robert G. Hauser of the Minneapolis Heart Institute published data that revealed defibrillators fitted with the Fidelis leads were firing inappropriately, delivering painful jolts to the patient. He brought his findings to Medtronic, which admitted that while the data was inconclusive, it was troubling. The manufacturer issued a letter to doctors in March.

Since then Medtronic has studied the findings from a clinical trial following 650 patients at 17 hospitals, together with significant data collected from CareLink, the system by which Medtronic monitors cardiac device patients. Information from 25,000 individuals was scrutinized.

Even so, statistically there is too little data to support a conclusion that the Fidelis lead is faulty. However, Medtronic is reacting now amidst growing - if not statistically conclusive - evidence suggesting the Fidelis lead is not reliable, with a nod to the Guidant debacle of three years ago. In the latter instance, Guidant - now owned by Boston Scientific - was slow to address defective products, a failing that angered the medical community and cast a pall over the industry.

More News
With this recall, the FDA's Daniel G. Shultz, director of the Center for Devices and Radiological Health, feels that the industry has turned a corner. Dr. Robert Hauser agrees. He blew the whistle on Guidant Corp. three years ago, and speculates that past industry complacency would see a defective product remaining on the market far longer. In this way, Medtronic scores some public relations points, and any hit to its bottom line in the short term, translates as an investment in its long-term viability.

Still, one has to wonder about the process involved in developing the fracture-prone Fidelis lead in the first place. According to the New York Times today, Medtronic developed the lead as part of a race amongst competitors in the cardiac devices industry to come up with new, compact and flexible products. Why did the fractures not turn up in any long-term testing? Assuming, of course, that the testing would have equalled, or exceeded 30 months - the point at which the Fidelis lead is prone to develop hairline fractures.

It might have saved 4,000 to 5,000 unlucky patients from the risky surgery necessary to replace them.

Posted by
Brenda Strickland
on October 23, 2014
My husband had a Defribrillator put in september 2013 He had heart problems,when he went back to have it tested the dr said it had not done him any good it had not worked since he put it in
He said my husbands heart beat was too fast gave him some meds to lower his heart rate before they put that thing in him he was doing good he even made a garden and mowed our grass and felt good after they put that in him he started going down and got weaker and weaker
He passed away in June 2014