They already suffer from unnecessary shocks, which have huge consequences for their lives. Not only are the shocks incredibly painful, patients have no idea when they are going to occur so they live in constant fear of the next time their devices will malfunction.

Two years ago, Haley Douglas (not her real name) had surgery to implant a defibrillator and cardiac synchronizer after she was diagnosed with heart arrhythmia. Along with the devices, three Medtronic Sprint Fidelis Leads were implanted. Not long after her surgery, Douglas began noticing very serious side effects. 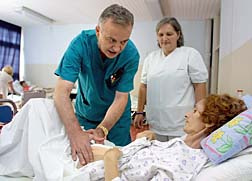 The first thing Douglas experienced was a thumping in her chest, a sensation she compared to that of a washing machine. Although it bothered her, the thumping was not nearly as serious as what would follow. The second side effect Douglas noticed, which began around six months after her defibrillator and cardiac synchronizer were implanted, was a burning sensation in the area that the devices were implanted. "It feels like there is burning in your bone," Douglas says. "You feel like you are going to catch on fire."

The third side effect Douglas noticed began a year and a half after her surgery. She began to experience little shocks in her chest. She says that the shocks occur in groups of six or seven and that there is no way of knowing when they will occur, except that they happen more frequently at night. "It can happen in my sleep or when I'm driving, I don't know for sure when it will happen," Douglas says. "But I'm suffering sleep deprivation because I'm worried about it."

Douglas says that the shocks have started to occur more and more frequently and they now occur every day. Between the shocks and the burning sensation, she says she barely sleeps at night now. "The doctors think that the device isn't the problem," Douglas notes, "but I did not have these problems before the surgery. I didn't have burning sensations or shocks before the device was implanted."

Douglas' husband, Alex, says that the medical community moved too quickly to promote Sprint Fidelis Leads. "The companies rush to put in a new device, then deny that it's causing a problem when problems arise," he says. "The side effects here are more troublesome than the condition they are trying to treat. The doctors did not warn her about these side effects. They moved too quickly in reducing the size of the leads."

More News
Douglas received a letter from Medtronic dated October 22, 2007, alerting her to possible problems with the Sprint Fidelis Leads. However, the letter also states that the change of problems with the leads is small and that patients should have their devices checked. "She is experiencing significant, uncomfortable problems," Alex says. "We don't really feel like going back to see doctors who have denied the existence of problems."

Douglas says that she is currently looking for a new doctor, one who will take her concerns seriously. "I don't know if people realize the effect that the sleep deprivation has on you," she says. "It compromises your life and interferes with it. I have more stress now and anxiety attacks because I do not know when I'm going to receive these little shocks."