Medtronic: No Human Testing of the Failed Sprint Fidelis Lead

In a blockbuster revelation published in the March 6th, 2008 edition of the New England Journal of Medicine (NEJM), we learn that Medtronic was allowed to take the defective Sprint Fidelis lead to market with only bench testing, without the need for a human trial.

Medtronic halted sales of the ultra-thin leads after a spate of adverse event reports, and five deaths. 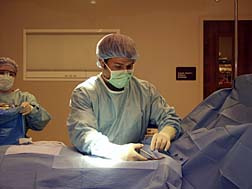 Such leads, or wires connect life-giving pacemakers and defibrillators to the heart, and perform a variety of functions. In the case of a pacemaker, the lead delivers the regular, life-giving electrical impulse to the heart in an effort to maintain its rhythm. A defibrillator, on the other hand, not only relies on the lead to deliver a life-saving shock to the heart as required, but also depends on the wire to transmit important data from the heart to the defibrillator. Should the heart fail, this failure is detected by the implanted medical device via the lead, and responds as appropriate.

The advent of the thin Fidelis lead proved popular with surgeons, in that its design proved easier to thread along, and through delicate tissue during surgery.

The new, thin implantable cardioverter-defibrillator (ICD) lead proved immediately popular, with 90 per cent of procedures featuring the new lead. As many as 268,000 implantations worldwide were performed over a three-year period.

But then, things began to unravel. According to a perspective essay published March 6th in the NEJM, Dr. William H. Maisel, M.D., M.P.H. recounts how Medtronic had begun to notify physicians by March of last year that a limited number of physicians had begun to see a higher-than-expected fracture rate pursuant with the Fidelis lead.

However, rather than analyze the available post-marketing data which was insufficient despite more than 250,000 implantations, it is reported that Medtronic focused on a group of 25,000 patients involved in the company's remote ICD monitoring program.

Dr. Maisel notes that even as Medtronic publicly maintained that the lead performed within acceptable parameters, the company submitted an application to the US Food and Drug Administration (FDA) for design changes in May of that year. Approval came two months later. Still, according to Dr. Maisel, the original problematic leads remained in stock and continued to be implanted.

Some five months later, after confirming 665 fractures in returned leads and the deaths of five patients whose demise may have been linked to the leads, Medtronic recalled the Fidelis lead in October of 2007. A 2.3 per cent fracture rate had been established within 30 months of implantation.

The situation put 268,000 recipients of Medtronic Fidelis leads on a slippery slope. A lead that was demonstrating less-than-reliable function, or absolute failure would provide just cause for removal, and replacement. However, removing a lead carries certain risks to the heart muscle, and other soft tissues. Surgeons are justifiably reluctant to perform replacement surgery, given the risk, unless absolutely necessary. More often than not, patients were apprised of the warning signs of a potentially failing lead. Beyond that, they were encouraged to simply live with it.

The toll to a patient's emotional health, with knowledge that a potentially defective Fidelis lead is influencing the heart and wondering if, and when it might fail, could be incalculable.

But beyond that is Medtronic's original, and apparently anemic attempt at post-marketing analysis—and the FDA's own policy with regard to the approval process.

In the former, Medtronic based its original findings of acceptable performance within accepted parameters based partly on an original failure rate of 1.1 per cent within two years of implantation. However, the study generating that conclusion was based on fewer than 100 patients followed for two years. According to Dr. Maisel, the study "was grossly underpowered to detect even a moderate increase in fracture rate in the Fidelis as compared with its predecessors." The doctor, writing in the New England Journal of Medicine, goes onto to suggest "despite implantation of the device in hundreds of thousands of patients during several years on the market, the available post marketing data were insufficient to provide a definitive conclusion about whether there was a performance problem."

And then there's the FDA's own policy with regard to approval of new devices. In this case, Medtronic was able to take advantage of a loophole in the approval process.

To wit, as the Sprint Fidelis was regarded as an improvement, or modification of the existing Sprint Quatro lead, it allegedly did not require a human trial—only bench testing.

This would have most assuredly expedited the product to market.

In his essay published in the March 6th edition of the NEJM, Dr. Maisel writes about the inherent demands placed on an ICD lead, which includes but are not limited to the hundreds of millions of cardiac cycles, the capacity to deliver high-voltage energy instantaneously, and the capacity to "survive in the hostile environment of the human body."

More News
As such, there was apparently no requirement for human testing to determine if this new, ultra-thin lead would indeed withstand the hostile environment of the human body.

In his essay Dr. Maisel takes manufactures to task for the failure to publicly disclose information about device safety, which he says only serves to subvert the process.

But he also slams the FDA for not living up to its mandate to maintain responsibility 'for protecting the public health...' and for '...helping the public get the accurate, science-based information they need.'

"Unfortunately," writes Dr. Maisel in the New England Journal of Medicine, "the agency is failing to fulfill that mission."

Dr. Maisel is a member of the Medicare Coverage Advisory Committee, and is a consultant to the FDA.