Under the arguments made before the US Supreme Court on December 4, 2007, by Deputy Solicitor General Edwin Kneedler, on behalf of the Bush Administration, in support of the medical device maker Medtronic, American citizens injured by a defective device would not be allowed to sue the manufacturer of a product, ever.

In a nutshell, the government claims that, once a device and the warnings on its label are approved by the FDA, state law claims alleging injuries caused by a defective device or a failure to warn are preempted.

It's impossible to make a distinction between the government's legal team and the team arguing for the device giant, because Medtronic is represented by Mr Kneedler's old boss, Ted Olson, the former Solicitor General for the Bush Administration, who argued the Administration's position before the Supreme Court until he left office in July 2004. 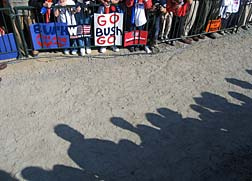 This is the same Ted Olson who represented Governor George Bush before the Supreme Court in the case of Bush v Gore and persuaded the Court to halt the recount of votes in Florida in a 5 to 4 decision which served as the final act in the Governor's theft of the 2000 Presidential election.

During oral arguments on December 4, 2007, the Administration double-teamed the private citizen and said that preemption would apply even when a company (1) continues to sell a device after a new defect is discovered; (2) fails to add warnings to the label when new risks become known; (3) fails to revise the label when its instructions are being misconstrued by doctors; (4) fails to send Dear Doctor letters notifying doctors of previously unrecognized problems, or (5) fails to disclose a risk or defect to the FDA during the pre-market approval process or at any time thereafter.

The plaintiff in the case, Charles Riegel, was injured when an Evergreen Balloon Catheter unexpectedly burst during a 1996 angioplasty procedure, after which he was put on life support and had to undergo emergency bypass surgery.

Mr and Mrs Riegel subsequently filed a lawsuit against Medtronic in the US District Court for the Northern District of New York, alleging five causes of action: (1) negligence in the design, testing, inspection, manufacture, distribution, labeling, marketing and sale of the Catheter; (2) strict liability in tort; (3) breach of express warranty; (4) breach of implied warranty, and (5) loss of consortium.

The case was appealed to the US Court of Appeals for the Second Circuit, and the court affirmed the lower court's decision in May 2006 and concluded that federal law preempted the lawsuit because the FDA had imposed device-specific requirements on the catheter, and if the Riegels won at trial, a damage award would amount to a state requirement that differed from, or added to, standards specified in the PMA application.

Charles Riegel has since passed away, but his wife filed a petition for review in the Supreme Court, and on June 25, 2007, the Court agreed to hear the case, despite the Bush Administration's recommendation in an amicus brief that the Court not review it.

The Public Citizen Litigation Group represented the Riegels during their appeal in the Second Circuit, and Public Citizen attorneys Allison Zieve, Wayne Smith and Brian Wolfman are representing Mrs Riegel, as the petitioner in the Supreme Court.

Legal experts say the ruling in this one case will apply to thousands upon thousands of lawsuits filed all over the country by persons injured by defective products used with heart patients such as defibrillators, pacemakers and stents, as well as devices implanted during hip, knee, spinal and other types of replacement surgeries.

Express preemption is supposed to apply only when Congress specifically states an intent to preempt in the language of the statute. In the case of the MDA, there is no indication in the legislative history that Congress even considered the possibility that the provision would preempt state tort lawsuits, much less intended it to do so.

The Court invited the Bush Administration to offer the government's view, and of course, by use of tax dollars contributed in large part by many of the same injured Americans who might have cause to sue Medtronic, the Administration submitted a brief that directly echoed the views of Mr Olson.

More piling on by the Bush Administration is evidenced in an amicus brief filed by Daniel Troy, the Administration's former Chief Counsel at the FDA, and Carter Phillips, a former Assistant to the Solicitor General, in support of Medtronic on behalf of the Advanced Medical Technology Association, Defense Research Institute, Medmarc Insurance Group and Medical Device Manufacturers Association.

The October 22, 2007, press release announcing this brief professes a phony concern for patients by stating that, "allowing a state-law liability approach to assessing safety and effectiveness would lead to reduced patient access to essential medical technologies."

Mr Troy claims that state tort liability would stifle the innovation of important and life-saving devices, undermine the affordability of medical treatments and encourage defensive labeling and over-warning that undermines rational prescribing by physicians.

This is the same Mr Troy who served as a one-man wrecking crew to the rights of citizens to hold the pharmaceutical industry liable for injuries caused by defective products during his roughly 2 years in office. In fact, he spent so much time colluding with the industry by writing amicus briefs to help companies defeat private citizens in civil lawsuits that Congress chopped a half a million bucks off the FDA's budget.

If given the choice, taxpayers would never agree to pay for all these amicus briefs to effectively defeat themselves. If the Bush Administration is successful in obtaining a blanket of immunity for the major corporations, taxpayers will be left holding the bag to pay for not only the medical care of citizens injured by defective products but also the life-long care for persons who are disabled.

Additionally, the push for preemption is not limited to the pharmaceutical industry. Top officials in other federal regulatory agencies are also working in concert with the other major industries facing product liability lawsuits in supporting the claim that federal regulations preempt recovery by injured consumers.

The Product Liability Council has filed an amicus brief supporting preemption for the device maker in the Medtronic case, and the list of members for the Council includes just about every major corporation in America.

Public Citizen points out that, in recent years, the Office of the Comptroller of the Currency has issued rules that purport to preempt state consumer protection laws related to banking and the National Highway Traffic Safety Administration, in conjunction with notices on proposed safety standards for cars, has stated that the new standards would preempt state product liability law. Also, the Consumer Product Safety Commission issued a mattress flammability standard that claims to preempt state tort law.

When the Administration could not get Congress to legislate its anti-consumer agenda, it acted unilaterally through its executive agencies, according to Senator Patrick Leahy (D-VT), chairman of the Senate Judiciary Committee, at a September 12, 2007, hearing entitled, "Regulatory Preemption: Are Federal Agencies Usurping Congressional and State Authority."

"We are now witnessing agency rulemaking turned into a mechanism to immunize powerful corporations at the expense of ordinary Americans," he warned.

"The intended result of this politically-motivated version of rulemaking," he points out, "not only slams the local courthouse door shut on injured victims but it prevents State law, State regulators and State courts from protecting their citizens."

"For hundreds of years that system has provided an effective incentive for manufacturers to improve safety," he said, but, "it is now being threatened by this aggressive legal theory."

David Vladeck, a professor of Law at Georgetown University, testified at the Senate hearing and said the FDA's track record demonstrates its inability to protect Americans against dangerous devices and noted that, in the past few years, there have been massive recalls of defibrillators, pacemakers, heart valves, hip and knee prostheses and heart pumps — "all of which have exacted a terrible toll on the patients who had replacement surgery," he said.

The Professor also pointed out that Medtronic's 4004M pacemaker was approved by the FDA and was later found to be defectively designed. "Some patients died when the pacemaker's defective lead failed; many patients were forced to undergo open-heart surgery to replace the defective lead," he said.

He cited Guidant as another example where the company kept selling the defective defibrillators, even after it learned of serious defects, and even after a newer, safer model was developed, until forced by adverse publicity about the death of a 21-year-old college student and litigation to recall the defibrillators.

"By that time," he testified, "more than 24,000 of the defective devices had been implanted in patients, who then faced the daunting decision of whether to have replacement surgery."

"If the FDA gets its way, all of these people would be left without any remedy at all," he added.

The Professor says that, if the Executive Branch believes that these decisions represent sound policy, then it should come to Congress and "have that debate in an open and democratic way."

"Let the Administration explain to the American public why people injured through the fault of others should have their right to compensation taken away by the federal government," he stated.

"But above all else," he told the committee, "Congress should not let the Executive Branch arrogate these decisions to itself and then tell the American people that it is Congress that has determined to take away these rights."

Many legal experts are accusing the Administration of making an end-run around Congress. According to Attorney Derek Braslow, of the Pennsylvania firm of Pogust & Braslow, "the goal of the Bush Administration's position is to achieve tort reform without obtaining consent from Congress."

"The reality of preemption," he says, "allows companies to market unsafe products and avoid being sued when they deceive consumers about safety and effectiveness."

On December 10, 2007, Mr Braslow went head to head with attorney Sharon Swingle from the Justice Department during oral arguments in the Third US Circuit Court of Appeals for an appeal of a ruling by Federal Judge Michael Baylson, in the Eastern District of Pennsylvania, that was the first to grant the FDA's preemption rule full deference in a wrongful death and survival action, with failure-to-warn claims against Paxil maker GlaxoSmithKline, and generic Paxil maker Apotex, in the case of Colacicco v Apotex.

In this case, the Judge asked the FDA for an amicus brief himself, and Mr Troy's successor as Chief Counsel, Sheldon Bradshaw, fired one off within 20 days, supporting the drug makers. Mr Braslow says the FDA ended up being the primary advocate for preemption because Glaxo barely addressed the issue during oral arguments.

On appeal, a dozen doctors and scientists lent their names to amicus arguments that preemption "would threaten the public health and eliminate an important counterpart to the public health objectives of the FDA."

More News
According to Mr Braslow, "a preemption argument by the FDA in a few amicus briefs has become the main argument in all prescription drug cases leaving injured persons with no recourse, no matter how fraudulent a company's conduct is."

Mr Braslow says that, if the Supreme Court agrees to hear the case of Wyeth v Levine and issues a preemption ruling in favor of Wyeth, "it could very well be the end of drug litigation."

Although most attorneys would no doubt consider an appointment to serve on the US Supreme Court to be the highest honor of the profession, if the current court issues preemption rulings that effectively slam the courthouse doors on American citizens, 20 years from now the history books will be describing the members of the Court who voted for the get-out-of-jail-free cards as the most corrupt justices in US history.