Given the aging Baby Boomer generation and increasing prevalence of arthritis, is it little wonder that bone graft substitute (BGS) is expected to play a part in the growth of the US orthopedic biomaterial market to an estimated $3.7 billion in just four years’ time. However, that projection by a leading research institute comes in spite of a reported decline in sales of Medtronic Infuse bone graft. 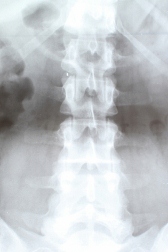 The reason for diminished sales, according to PR Newswire (1/30/13), is waning Medtronic off label use in the wake of concerns over Medtronic complications.

Those complications can include growth of Medtronic bone in places where neither patient or doctor wants it to grow.

Those Medtronic complications include, according to Carragee, crippling back and leg pain, and ectopic bone formation (unwanted bone in the spinal canal).

The latter is the byproduct of how rhBMP, or recombinant human Bone Morphogenetic Protein, works. Unlike traditional bone grafts that stem from a patient’s own tissue or that of a donor to help augment lost bone or heal bone in concert with bone fusion, the proteins associated with Medtronic Infuse are described as powerful hormones, encouraging new bone to grow more rapidly, and thereby eliminating the need to harvest bone from the patient or from a donor. Another stated advantage is a minimization of potential for infection and disease.

However, says Richardson, who is a physical therapist, unwanted bone can be a major problem and has formed the basis of many a Medtronic lawsuit.

Part of the issue arises over Medtronic off label use of a product that was approved by the US Food and Drug Administration (FDA) only for specific types of spinal surgery, the cervical spine, sinus augmentation and localized alveolar ridge augmentation. While a product manufacturer cannot promote or market a product for any use or indication not sanctioned by the FDA, it is within a surgeon’s moral and professional purview to direct a product for use associated with an indication not otherwise approved by the FDA, provided the doctor or surgeon feels it is medically prudent, based on his or her understanding of the product, to do so.

In this way, a doctor can supersede the express wishes of the FDA, which in this instance serves as a guide, rather than a de facto governor of such activity.

More MEDTRONIC INFUSE BONE GRAFT News
That said, there have been problems. For one, use of Infusion bone graft in the cervical spine has led to complications, including breathing problems, difficulty in swallowing or speaking, compression of the air passageway and respiratory depression after bone has grown where it wasn’t supposed to.

At one point, Medtronic was accused of promoting Medtronic off label to doctors, when it was not their express right to do so.

While Medtronic off label use is said to be on the decline, the product is still in the pipeline, albeit with requisite warnings and cautions from the FDA. And despite reported lagging sales, Millennium Research Group remains bullish about the fortunes of the BGS medical device segment in the years to come.

Growth is the key word here - but only growth of the financial kind. Growth of unwanted bone, in the wrong place, is never a good thing. It will remain to be seen if continued growth in the BGS segment will foster additional Medtronic complications down the road.