Even in the wake of the closure of a federal investigation into Medtronic and, specifically, allegations of off-label marketing of its Medtronic Infuse bone graft, lawsuits continue to be filed by disgruntled plaintiffs. 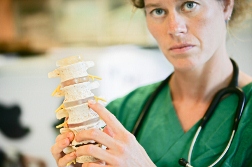 A Medtronic lawsuit has been filed in US District Court for the Western District of Oklahoma by plaintiff Patricia Caplinger (Caplinger v. Medtronic Inc. and Medtronic Sofamor Danek USA Inc., Case # 5:2012cv00630; Source: Justia.com). In her lawsuit, Caplinger asserts that she had a Medtronic bone graft surgically implanted through her back in 2010, and now suffers from muscle paralysis leading to 'foot drop' that subsequently fostered a torn ligament in her knee.

According to the complaint, Caplinger's Medtronic complications include continuous back and leg pain, and the plaintiff asserts she is at a 'significantly' higher risk for cancer.

While Medtronic's bone graft was awarded approval by the US Food and Drug Administration (FDA), various lawsuits have accused Medtronic of issuing payments to various physicians in order to promote off-label uses of the graft. While doctors have the legal, moral and medical authority to use products off-label (in other words, for uses outside the bounds of those formally approved by the FDA), manufacturers cannot market their products for any off-label use.

The off-label issue became such that the FDA alerted the medical community in 2008, cautioning doctors against using Infuse for off-label purposes, even though they carry the authority to do so. That same year, in October, the US Department of Justice and the US Attorney for the District of Massachusetts opened a series of investigations that just recently concluded.

Also in 2008, a federal whistleblower Medtronic lawsuit was launched, alleging the potential for conflict on the part of doctors accepting consulting fees in exchange for promoting Medtronic off label to their colleagues.

More MEDTRONIC INFUSE BONE GRAFT News
The Caplinger lawsuit suggests the implantation of Medtronic bone graft to her spine by way of her back cut against the intent of the FDA which, according to the lawsuit, was approved for insertion through the abdomen only. The lawsuit also accuses the manufacturer of downplaying what were described as known complications of implantation through the back, including ectopic bone growth, back and leg pain, and risks of sterility and cancer.

"A number of patients say they have been harmed in off-label uses of Infuse, which is approved by the FDA only for anterior-approach surgery in a small section of the spine in the lower, or lumbar, region," the Caplinger lawsuit asserts. "At least 280 reports of adverse events involving Infuse have been made to the FDA. Approximately 75 percent of those reports involve off-label use,” the suit continued. The complaint alleges product defect, failure to warn, negligence and fraud, and seeks compensatory and punitive damages.