Pansy says she was trained in surgical procedures so she did everything to avoid spinal surgery. But she wasn’t trained in the side effects of Medtronic Infuse bone graft. 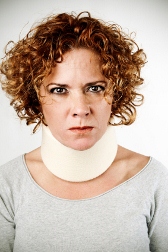 “I understand that spinal surgery is dangerous because you risk paralysis but my orthopedic surgeon said I had no choice if I wanted to relieve the pain,” says Pansy. She had three compressed discs - C5, C6 and C7 - as a result of a car accident. “My surgeon described the procedure to me, using the bone graft, but I don’t remember him ever mentioning Medtronic life-threatening complications,” she adds. “It wasn’t until a few months ago that I found out this procedure was done off-label, and then I discovered all the Medtronic lawsuits.”

The Medtronic Infuse bone graft was approved by the FDA in 2002. However, its approval was solely for the treatment of degenerative disc disease as part of a single-level, anterior lumbar interbody fusion. The FDA had not approved the Medtronic Infuse implant for other procedures in other areas. According to the FDA’s “Summary of Safety and Effectiveness Data” for the Medtronic Infuse Bone Graft/LT-CAGE™ Lumbar Tapered Fusion Device, the FDA notes, “The safety and effectiveness of the InFUSE Bone Graft component with other spinal implants, implanted at locations other than the lower lumbar spine, or used in surgical techniques other than anterior open or anterior laparoscopic approaches have not been established.”

“I wish I had never agreed to the surgery - it turned out to be a colossal mistake. As most people do, I believed in my surgeon and went ahead with the surgery a few years ago. It was a tough recovery and I was frightened; I had lots of anxiety and concern. And it took a long time to recover. I wore the collar for a long time and gained 30 lbs over six months or so - it was a major setback. The pain in my arm was relieved but my movement was very restricted in my neck and shoulders - I didn’t have that problem before surgery.

“Finally the collar came off and according to my doctor everything was good. About seven months from the date of surgery he released me from his care. But a few months ago, I started to get migraine headaches, every single day. That was the beginning of the Medtronic complications.”

Pansy started to get pain in her right arm, neck and a particular spot in her upper back that felt like shocking sensations from her neck down her right arm. She couldn’t even lift her arm; she was unable to move it from her shoulder down. Needless to say, this was a major setback that hindered her career as a fitness writer.

“One particular day the pain was unbearable. I went to urgent care because my family doctor was unavailable,” says Pansy. “They took x-rays and the results scared me. The doctor looked appalled. He basically said my neck was broken. ‘It appears that you have three fractures in your neck but you need to go back to your surgeon and have him look at your neck,’ he told me. At this point I couldn’t even stand up straight or sit down for any length of time, I felt like I couldn’t hold my head up.

More MEDTRONIC INFUSE BONE GRAFT News
“I called my surgeon and I got in to see him immediately. He took more x-rays, looked at me like he was in shock and said that the bone graft hadn’t worked and unfortunately my C7 is broken. And he said in 15 years he has never seen this before. That wasn’t reassuring. But it did explain why my arm was numb.

“I later found out that Medtronic Infuse can cause nerve damage. My surgeon also said the last time he saw me, in May 2010, everything was intact. He cannot determine when it started falling apart. He said I have a recent development of right arm pain due to the surgery and I now am facing yet another surgery.”

The Medtronic Infuse bone graft is used in about 25 percent of about 432,000 spinal fusions performed in the U.S. annually, according to the New York Times. Many of those fusions are used off-label, which has helped Medtronic turn its product into a product worth $800 million a year.

Posted by
Carol Hughes
on July 28, 2013
surgery May 2004 in Indianapolis, In. L4/L5 and L5/S1 was fused. Bone was taken from lower abdomen (hip bone?) and placed in my lower back. Never recovered and was put on disability. It was labeled - Failed Back Surgery.
Posted by
shannon
on May 23, 2013
In your surgery reports they put the labels from the products implanted. This tells what device was implanted.
Posted by
STACEY ALBERS
on January 22, 2013
HOW DO YOU FIND OUT IF MEDTRONIC INFUSE WAS USED ON YOU? I HAVE HAD TWO MAJOR BACK SURGERIES IN TIME FRAME .
Posted by
nancy smith
on January 20, 2013
it doesn't say on my report that i had infuse but i have numb arm headaches and pain all day and night could i have it and it isn't saying that in report ?