Chris has been disabled for three years - since having a Medtronic Infuse bone graft implanted. “Ever since this Medtronic bone was put in my back, my life has been hell. I’ve worked all my life and I’ve always been the provider for my family,” says Chris.
“Now I can no longer be that man.” 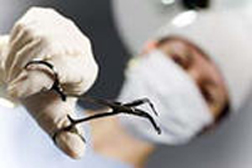 Chris, 33 years old, worked in the construction industry. Now he is on disability. Had he known about Medtronic complications, Chris would never have gone through with the bone graft surgery. His problems began after a car accident in 2010.

“I was in a lot of pain due to the accident and tried injections to stop the pain from going into my legs but nothing worked so I was referred to a neurosurgeon,” Chris explains. “He recommended a Medtronic bone fusion of the lumbar, which would relieve my pain.”

Chris had the first Medtronic surgery in 2011. The screws shifted so he had to get another surgery just 45 days later. Needless to say, the surgery did nothing to relieve his pain. Instead, it got much worse.

“I was sitting on my shower chair and I fell off the chair,” says Chris. “It was just a slight fall that wouldn’t hurt anyone, but it caused the worst of the Medtronic complications. The Medtronic hardware - something that was supposed to be stable and never move - shifted into my nerve root.”

Chris’s wife called 911 and an ambulance rushed him to emergency. A CT scan revealed a bulged disc, but his neurosurgeon ordered a myogram, a procedure that combines the use of dye with x-rays or CT scans to assess the spinal cord. He determined that the bone graft had shifted. Chris needed yet another surgery.

“Last month my neurosurgeon was able to cut out the right side of the Medtronic screws and rods, and when he got to the left side, he cut into scar tissue to remove it,” says Chris. My surgeon told me later that my nerves were jumping during the surgery - as if he was cutting into nerve. He told me that if the scar tissue was cut, I would have been paralyzed from the waist down.”

After the neurosurgeon tried to remove the fusion, he told Chris that the Medtronic surgery would most likely affect him permanently. Now Chris can only walk with a cane. He needs help taking a shower (even sitting, he can’t risk another fall) and he needs help putting on his socks and shoes.

More MEDTRONIC INFUSE BONE GRAFT News
“I was promised the Medtronic Infuse would relieve my leg pain and it never did,” Chris says, fighting back tears. “Now I am much worse. I am scheduled today to have a Medtronic nerve stimulator as a last resort to try and relieve the pain I am having in my legs. My right leg sometimes gives out completely and I can’t even feel it for a few seconds - it is actually paralyzed. My surgeon said if this stimulator helps at all, it might take away up to 45 percent of my pain, but I will most likely be on pain meds for the rest of my life.”

Right now Chris is taking diazapem twice a day for muscle spasms but he still has spasms. He takes oxycontin for pain every 8 hours and that only helps manage the pain. Chris says he hasn’t had a good night’s sleep in four years. Sleeping pills don’t work.

“The neurosurgeon believes the Medtronic is to blame and I believe him,” says Chris. “It hurts him that I hurt this bad.” Chris will find some relief with a successful Medtronic lawsuit, but it will never be enough to heal. “I wish I had never agreed to this Medtronic surgery - I was much better off dealing with pain from the car accident.”

Posted by
mark evans
on March 30, 2015
My situation is a lot like chris.only my age is 43.I was disabled at the young age of 38,after the medtronic infuse ruined my life.my surgery left me disabled with a cane and chronic pain 24 hours a day.I was a proud west virginia coal miner,now I'm a stay at home father of 3,spending 95%,of my time setting on a hard chair in horrible pain.sometimes I wish I were dead,caus the pain is so bad.I have lost a lot, of my income as a result from the disability.I made $83,000 the year I last was able to work.now on disability my income is less than $16,000.medtronic infuse has disabled me for life.and what can be done?its been nearly 5years,and my lawyer looks at me like I'm from mars when I ask about compensation for my losses,and all my pain that I have endured.what is going to become of this.?its almost like medtronic is waiting on its victoms to die out.is that the case? Only god knows.but I do know its rediculious.medtronic should be ashamed of them selves,on their profits before care campain,I have lost everything I have ever worked for,because of this,just to keep a roof over my kds and I heads.thanks for ruining my life medtronic infuse.see u all in hell...