In the space of four months Diane underwent four operations-the first, a hernia reconstruction, then three others to correct complications from the first. Diane alleges that surgery mistakes and improper practices have compromised her health and ability to work.

"The doctor at the Bolivar Medical Center in Cleveland said I had a hole where my intestines were hanging through," says Diane, "so they had to close it with a mesh pack. That was July. In August, during my regular checkup, they received over 600cc of surgical blood from my stomach. My stomach was breaking down.

"It was full of sores and I had to have a home nurse in for six weeks. The doctor had to put in another drainage tube so now my stomach was just huge. I mean it was big before but not like this." 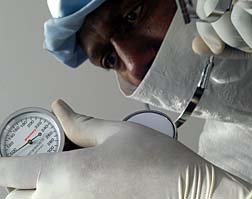 In October, Diane underwent another intervention, during which she contracted mercer blood infection (MSRA), a contagious infection also known as methicillin-resistant staphylococcus, a bacteria resistant to the usual antibiotics used to kill staph infections. "I simply knew something wasn't right," she says. "My stomach was hanging like I was about to have a baby and it was reddish from the infection. The doctor said it was like a little firecracker. I think it comes from something not being sterilized."

Diane landed back in hospital November 13th for seven days. "The doctor said he just had to go in and clean up the area a bit," she says. "Afterwards he said the mesh pack was still intact."

When Diane questioned the kind of mesh bag inside her, she had to wait for the doctor to check his office files to find out. "I'm so afraid that I've been on the internet and now the doctor who put in the mesh bag wants to remove it. But at least I knew enough now to be able to ask if that bag was one of those that had been recalled. Turns out mine was Gore-Tex Dual Mesh Biomaterial and the recalled one [was Kugel Mesh].

A computer lab teacher by profession, Diane has been off work two years, despite the doctor's assurance her absence would last only six week. "In that time, according to the state of Mississippi, my statute of limitations has just run out. A lawyer didn't want to touch it. He told me I couldn't go after this doctor because he had explained the complications to me but I'd still gone ahead with the operation. But he did not. I clearly remember the doctor reading from his notes only about laser treatment, and I remember saying to him 'if you're going to laser me, you may as well go in and cut.

"I was told with this infection there was no cure, they can only treat it. And I'd have to be on and off antibiotics. Yet my body still wasn't right and I almost died."

What convinced Diane that the doctor held some guilt was receiving a medical bill with a zero balance. "My Blue Cross and supplementary medical insurance covered my $33,000 costs. But on top of that, Home Help came in and someone, I don't know who, picked up those bills. The doctor paid for the machine I needed--I don't know why--but he just kept saying, 'don't you hesitate to call me'.

"There's no doubt in my mind that the surgery was botched, I can tell from the scars. The hole inside me is packed with over a yard of saline dressing.

"It's really turned my life upside down. I'm 51 years old. I get out of breath easily, I can't do any mopping, just a little sweeping, and my sexual activity is real low. My stomach's still sore; the middle part of my stomach has 35 lbs of scar tissue. For six weeks straight I had to wear a KC Vac to suck up the infection. It weighed about a pound or two and I toted it on my shoulder-very uncomfortable.

More News
I can't sleep on my stomach; the bottom part is all swollen. I can't wear the clothes I used to, can't wear heels. On the mental side, I've been very anguished because I've had so many surgeries and developed stress diabetes. It really plays with your mind. I had no such infection before. I'm angry with the doctor because he messed with me.

He made a medical error but won't admit it. He just says, 'if you need anything... On my insurance papers he wrote that I was completely disabled, that I can't go back to work. To me, that's his admittance of guilt.

Posted by
Heather
on May 7, 2015
I had Gor Tex dual mesh implant and nothing but problems had it removed and still problems so much scar tissue no regular doctor will touch me. Auto-immune problems that noone else in my family has. And now I need a specialist because possible organ prolapse happening.
Posted by
CINDY TAYLOR
on February 7, 2015
i had Adam-ail surgery in2012 in Omaha Neb. they put Gore Tex mesh in me. i went back home to Kansas to here a little time after i got home i was not feeling good so i went to my doctor and he took blood work and found out i had so much poison in my body so he sent me back to Omaha to the doctor i had to have surgery again to remove the gore Tex Mesh because it was infected so Omaha told me that they got all the mesh out of me so back home i go. and a month or so i was still really sick so i back to my home doctor and he sent me to a doctor in McPherson Kansas and that doctor had to do 4 or 5 more surgery. because Omaha did not take out all the infected mesh because when the doctor seen me i had to surgery because the mesh or at lest 3/4 was still inside of me they had to remove part of my colon in Kansas and in Omaha my colon open up and i was in the hospital for 3 months i was on a feed tube for42 days. i was in ICU for22 days i have been back to ICU 2 more times .i can't work at my restaurant because i get so sick or just so tired i am short of breath all the time i can't drive my car very far with out get sick. my daughter had to move back home because my stomach will open up and i can't get up by my self there is so much stuff that has happen to me since i had that gore Tex mesh put in side of me. i can't believe they could something on the market that could kill you and if it don't kill you you don't have much of a life
i just wish i could get back to living and i will never be the same person i was
Posted by
Ruby
on December 22, 2014
In 2000 i had my daughter i lived in pain for 9 years only to find when they took my daughter c-section they ripped my stomach causing my insides to fall out it was then 2009 i had a gore tex mesh put in to hold it all in. Since then i live in pain and my stomach has never went back down to normal and if i eat or drink my stomach is twice its size of normal swelling so bad i look pregnant all the time and its not pleasant at all.
Posted by
LANA THARP In Indiana
on March 5, 2012
My name is Lana Tharp in July of 2001 I had emergency surgery my intestine busted, I was cut from right under my breast to my the end of my stomach I woke up with a bag on me and I was full of poison , I was in hospital for 3 weeks or more , then in 2004 I went back in for a reconnect and they took off the bag and fixed a hernia. I was fine but then I had to go back in 2006 and have hernia surgery again I had developed 3 hernia , in my lower stomach and were the bag had been and over on the right side of my stomach , they used the Gore -Tex -Dual -Mesh , and I now have a lot of problems with this one hernia that is on the right side of my stomach it is pushing out I have a basketball in my stomach and keeps spreading it is going down to my belly button now I can not were pants at all or skirts unless they have the strech in the band. some times I feel like I am going to bust open . has any one else had this issue with this mesh l