A federal judge has ruled that immigration officials must provide a Los Angeles defense attorney for two mentally disabled men who are fighting deportation, The Associated Press reports. 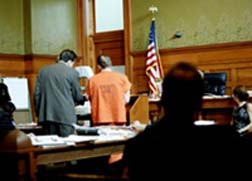 The recent decision by US District Court Judge Dolly Gee is one of the first that requires the government to provide attorneys to defendants in immigration cases, according to the news provider.

The American Civil Liberties Union of Southern California, which brought the case against the Immigration and Customs Enforcement agency, claimed that detainees who were mentally disabled would not receive a fair hearing if they did not have adequate legal representation. Unlike criminal courts, immigration courts are not required to provide legal representation for migrant defendants, the news source said.

"What we've said is that can't be the rule for people with serious mental disabilities," an ACLU attorney said in a statement.

The ruling stems from a number of cases that have become a class-action lawsuit claiming that federal officials denied constitutional rights and violated anti-discrimination laws that protect those with disabilities, the news source said.

If you or a loved one have suffered losses in this case, please click the link below and your complaint will be sent to a criminal law lawyer who may evaluate your Los Angeles Criminal Law claim at no cost or obligation.
Request Legal Help Now