Martin McBirney has almost 20 years of experience in the long term care insurance (LTCI) industry. He started out in this field as an actuary and subsequently did product development, marketing and lobbying. In the past 8 years, he has worked as an independent consultant and for the last 2 last two years he has focused on expert consulting work for plaintiff's attorneys regarding unfair claim denials and excessive rate increases.

"As part of my consulting work, I track companies that either go bad or go south," McBirney says. Conseco Senior Health Insurance is one such company that has "gone south". 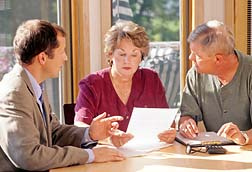 "The Conseco business was very poorly underwritten and priced at the outset," McBirney explains. "It is headed into a death spiral and now Conseco wants to shift it into an independent trust, which means that policy holders will be out in the cold. These policyholders are, on average, around 80 years old now; they have spent tens of thousands of dollars on their insurance and have little choice but to stay with what they have. With rare exceptions, these seniors cannot qualify for new coverage and even if they did, they would be sacrificing all the money they have spent to date.

"I am also concerned that other troubled companies will follow suit and unload underperforming blocks, especially given our economic climate," says McBirney. "Just a few days ago, a leading LTCI company saw their stock price drop 40 percent in one day and over 90 percent in the past year. They are now considering selling assets to raise cash—it's not pretty."

Is there any recourse for policy holders? McBirney is hopeful that the regulators will provide options for policy holders who are being punished for the abysmal mismanagement of these LTCI policies, such as those held by Conseco.

What follows is Martin McBirney's explanation on how Long Term Care Insurance got itself into this mess and a possible solution. In a following article, McBirney will talk about long term care insurers and the cost of paying claims.

For a product that so many thought had so much potential, long term care insurance (LTCI) has by and large failed to live up to its promise. Since 2000, when excitement over the product was at its peak, individual policy sales and the number of actively writing insurers have declined by more than half and there is little reason to believe the trend will reverse in the near future. Not unsurprisingly, this has kept the industry focused on efforts to increase sales and, in particular, ways to tap into the market that has eluded them to date, aging Baby Boomers.

While this is an understandable reaction, it has unfortunately kept the industry from preparing for the consequences of those years of declining sales and departing companies, which is to say, deteriorating blocks of policies with no new entrants, otherwise known as closed blocks.

In the area of health insurance, closed blocks often succumb to "death spirals" in which the healthy depart due to escalating premiums, which leads to further premium increases, further departures and so on. And while the structure of LTCI gives rise to a somewhat different expression of this mechanism, the net result is not notably different, save the fact that the remaining policyholders uniformly consist of elderly in their seventies and eighties who have no other place to go.

Estimates vary as to the extent of closed blocks, but they huddle around 30% to 40% of the industry's total in-force. These blocks typically consist of policies written from the late eighties to the mid nineties, during which period competition for market share and limited distribution was fairly intense and gross under-pricing was pervasive. As the LTCI industry has struggled to move forward over the last few years, these blocks have been quietly festering in the background, but are now moving to the fore. And none poses a greater threat to the security of affected seniors than the block held by the industry's currently most troubled insurer, Conseco Senior Health Insurance.

Ten years ago, when LTCI was booming, no company embraced the market quite in the way Conseco did. Beginning in the mid nineties, Conseco began buying up blocks of policies from companies like American Travelers, Transport Life, Pioneer Life and others. Conseco's stated goal was simple: to be the biggest LTC insurer in the business. And since they were late starters, they decided to do it with acquisitions. Very expensive acquisitions, as it turns out.

The policies that comprised the blocks they bought were uniformly under-priced and weakly underwritten and, by all consensuses, Conseco way overpaid for them. But, at the time, they didn't seem to care. They were flush with cash and wanted to be number one.

Then the bottom fell out. By 2002 Conseco began to suffer the effects of failed acquisitions outside the LTCI sector (principally Green Tree Financial, a mobile home lender) and, in December of that year, had to file for Chapter 11 bankruptcy protection. At the time, it was believed that the company's insurance operations were sound and would not be a problem. That also turned out to be a significant miscalculation.

In the ten or so years since Conseco purchased American Travelers, they have had to contribute nearly $1 billion over and above premiums collected to adequately reserve for future liabilities associated with that block and others. Last year alone, they contributed roughly $220 million.

Commensurate with these capital contributions, Conseco's closed block policyholders have had to endure a series of punishing rate increases which have nearly tripled initial rates on policies that they were told would have level premiums for life (some couples are now paying as much as $20,000 a year for their coverage). Yet, despite the capital additions and rate increases, the block is still performing 64% worse than expected. And given that it is right at the peak age for paying claims, and that a diminished number of policyholders have fewer years left to pay premiums, the future for these some 150,000 individuals is, at best, grim.

Not unsurprisingly, Conseco's stock has been punished by the performance of this block and over the years investors have pushed at Conseco to resolve the situation. In the spring of this year Conseco responded.

Aided by Morgan Stanley and Skadden Arps, Conseco crafted a plan to rid itself of the block and announced that plan to investors in a conference call on August 11. The plan was to place the closed block into an insurance shell inside an independent trust run by Conseco management but free of any ties whatsoever to Conseco into the future.

In essence, the planned trust imposes a mutual structure onto the block, creating a self-insured entity with no outside source of capital. As proposed in their filing with the Pennsylvania Department of Insurance, Conseco's plan is to provide a onetime final capital contribution of $175 million in the form of cash, securities and a $125 million note. After that, the policyholders will be left to their own devises and Conseco will be free of any future obligations. Thus, any adverse development in the level of claims, reduced investment returns, changing morbidity patterns, uncertain capital requirements, law suits, additional regulatory requirements, etc. will have to be addressed in the form of further rate increases.

To this point, Milliman USA, Conseco's actuarial consultants, project the need for five more rate increases in the future, valued at between $300 and $400 million, in order to keep the block solvent. Though the details of the Milliman report remain confidential, there is little doubt how this will play out for the affected policyholders. Further, because some 2/3 of the policies contain a provision that waives premiums for life in the event of the death of one member of an insured couple (now on average around 80 years old), a sizable proportion of the policyholders will soon have no premium obligations whatsoever, leaving those that remain with a leveraged burden.

It is the need for future rate increases that is at the core of Conseco's decision to rid itself of the block. Over the last few years regulators have begun to push back on the company's rate increase requests and have denied all or part of them. They have done this because they believe policyholders have been punished enough to date for Conseco's mismanagement. Requests that were routinely approved for the full amount in the late 90's and early 2000's are now cut back by as much as 50% or more. Conseco is fully aware of the implications of this trend and of the couple's waiver mechanism and that is why they want to take these policies off their books.

The stark consequence of this proposed divestiture is that, as rate increase needs emerge under the proposed trust, there will be no room to consider subjected policyholder's ability to pay, since there will be no other source of funding to keep the block solvent and pay claims. This insures that rate increases will be swift, sharp and for the full amount necessary and that, unlike today, there will be no partner to share the pain.

More LONG TERM CARE INSURNANCE News
If one were to look for the single greatest failing of the LTCI industry, it is this: with minor exceptions it has, over its 30+ year history, never leveled with the public as to the true cost of its product. Chronic under pricing, and subsequent rate increases delivered when policyholders have few options but to acquiesce, has been the dominant theme of insurers' rating practices and the consequences of this are now coming home to roost.

Whether and under what conditions the trust is approved remains to be seen. Presently, it is believed that the Pennsylvania Department will approve the trust before Thanksgiving, though the particular conditions to be attached are still being worked out. Approval of the trust will set a precedent that could usher in similar requests, thus dramatically multiplying the cost of outright failure, an outcome that is on every regulator's mind.