Melissa C. took Levaquin for less than a week before she suffered severe Levaquin side effects. Although she has not suffered Levaquin tendon ruptures, her pain has not improved since stopping the medication. Now Melissa is worried that she could suffer from debilitating pain for the rest of her life. 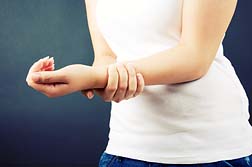 "I got the Levaquin on a Tuesday, about two weeks ago," Melissa says. "By Saturday, I started having pain in my arms and my legs. It was like that pain you get when you work out. The next day I had pain in my arms, elbows, wrists, ankles and armpits. I was hurting so much I could'nt even carry my purse. I called the on-call doctor who told me to stop taking the Levaquin immediately because a side effect of it is tendon problems.

I saw my regular doctor that Monday and I was crying because it hurt so much. The doctor prescribed me some pain medication and an anti-inflammatory. I was told to get five different blood tests done, including one for muscle deterioration. All the tests came back fine and she didn't know what else it could be, other than that it had to be from the Levaquin.

She documented in my chart that I could not take Levaquin and I was told to see her if things got worse. That Friday, I went to see her because my forearms were badly swollen. I still can't wear my watch, bracelets or rings because the tendons in my arms are so swollen. The doctor sent me to a specialist, who sent me for six more tests, including for inflammation and arthritis. They all came back okay again. Now, there's no other option other than this is from the Levaquin.

My arms are so swollen—it looks gross and it's only half my arms, where the tendons are that go to the wrist. The doctor gave me two shots of cortisone, one in each of my elbow joints, but that did not help with the pain at all.

The pain hasn't gone away since that Saturday. It is always there. The pain medication makes it less intense, but I still know it's there. Without the pain medication, the pain is as bad as it was when this started. The doctor said the Levaquin was supposed to be out of my system in six to 12 hours after the final dose, which was a while ago and I still have this constant pain that won't go away.

What really stinks is that I was given this for a possible case of pneumonia. Even with my insurance, the Levaquin was going to be expensive, so my doctor gave me some sample packs of Levaquin. I never saw the warning label because I was just given sample packs. I had no idea this could be a side effect.

It's definitely debilitating. What's scary is that this could be a lifelong thing. The only thing I could have done to prevent it was not take the medication. I went from being sick to having this pain all of a sudden and I just wonder, will it ever end? Will I wake up tomorrow and not hurt?"

I am concerned that this is permenant...
Can anyone tell me that is will go away or how I can cleanse my body from this terrible drug.
Please help me!