Did Levaquin Drop the Ball on Your Achilles Tendon? 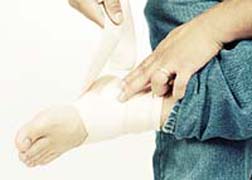 The Madison County Record reported May 2 that a total of 54 plaintiffs who hail from a number of states filed a complaint April 5 at St. Clair County Circuit Court.

The complaint notes that even though tendon issues were included in safety information originally accompanying Levaquin when it was introduced in 1997, the caution was buried deep in the literature. There was also, according to the complaint, no reference relating to the tripling of the risk for Levaquin tendon problems in patients over 60 years of age or those actively involved in corticosteroid therapy.

The lawsuit notes that following the release of studies pointing to tendon risk, the manufacturer of Levaquin updated the warning label relative to the risk for Levaquin tendon ruptures—but only referenced corticosteroid use and allegedly made no reference to the elderly.

"Accordingly, despite the 2002 label change, Levaquin prescriptions only increased and tendon injuries mounted," the suit states.

More LEVAQUIN News
The lawsuit notes that while Johnson & Johnson conducted tests to determine the realities and the extent of the alleged tendon risk, the manufacturer limited its focus on ruptures to Levaquin and Achilles tendon, and failed to assess the wider risk of other tendon injuries. The complaint further accuses the manufacturer, during its study, of creating an algorithm that effectively excluded about 70 percent of seniors who had suffered problems with their Achilles tendon.

The seven-count lawsuit notes that revised Levaquin labels appearing in April 2007 and July 2008 were still found to be lacking as to the true nature of the risks of the Levaquin medication. The action notes that adverse reaction reports to the US Food and Drug Administration (FDA) from 1997 through 2005 totaled 1,044 reports of tendon injury, together with 282 reports of tendon rupture.

The Levaquin medication lawsuit alleges negligence as well as other claims, and seeks actual and compensatory damages, plus costs. The plaintiffs hail from a total of 19 states.