Patient's Knee Swells up After Levaquin Use

Some patients who have taken Levaquin know how debilitating the side effects can be—the drug has been linked to an increased risk of tendon tears and tendon ruptures. Mark P. (real name withheld) says he suffered Levaquin side effects and still feels the associated pain. 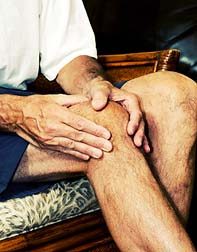 "Fifteen years ago, I had some problems with diverticulitis," Mark says. "I ended up in the hospital and had a colon resection. Doctors cut out 18 inches of my intestine and that solved the problem.

"About six or eight months ago, I got a familiar pain. It was the first time since I left the hospital in 1992 that I had that pain, and I knew exactly what it was. I called the doctor and told him I had a flare up of diverticulitis. He said that he concurred with my diagnosis, and he was going to give me two antibiotics [one of which was Levaquin].

"I took the two antibiotics and my right knee swelled up about a week or so later. I never put the two together—that it might be the medication. I know I didn't do anything to aggravate it."

"It was affecting my lifestyle"

"I finished taking the medication but my knee remained swollen. It was sore and it was affecting my lifestyle, which included tennis and walking my dogs. Two weeks later, my knee was still bothering me. I was sent to an orthopedist who told me that my tendons were torn. He recommended a cortisone shot and told me to keep an eye on it. If it was still bothering me, we would schedule knee surgery. After the shot, the swelling went down.

More LEVAQUIN News
"When the knee was swollen, it lamed me. I normally walk my dogs up a main street where I know a lot of people. They commented that I was hobbling up the street and I looked like I was in a lot of pain. At the time, having been through as much as I had, I was not going to sit down just because of knee pain. But, after a month it really bothered me.

"It still bothers me. Just last night while I was walking my dogs, I could feel it. I wasn't hobbling, it didn't shorten my walk, but my knee doesn't feel as good anymore.

"It certainly affected my two-mile walk with my dogs and it killed my tennis for the rest of the summer. I don't know what affect it will have, come spring when I want to play tennis again. I can still feel it now, but I'm not stressing the knee when I'm walking. When I play tennis, I will be stressing the knee."

Posted by
vicki sellers
on December 17, 2015
I just finished taking a dose of 550 mil of Levaquin, & was on it for 10 days. I woke up a few days ago w/ my knee really swollen & it is hard to put weight on it. It feels like its going to pop out of place. I havnt done anything to cause this kind of problem. Could it be the Levaquin, & if so what do I do?