Are Levaquin Warnings Getting to the Patient?

In October, a jury in State Court of New Jersey ruled in favor of the defendant in a levaquin lawsuit, finding that Levaquin manufacturer Johnson & Johnson (J&J) had provided adequate warnings about the risks associated with the flouroquinolone antibiotic. 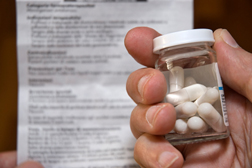 However in an investigative report aired in June on the PBS NewsHour, Dr. Ray Woosley noted that a black box warning of the kind that has been recently assigned to Levaquin by the US Food and Drug Administration (FDA) is in actual fact intended to inform the prescribing physician, not the patient.

While the patient guides that are required for some medications are worded at the layperson level, says the pharmacologist and internist who heads up the nonprofit Critical Path Institute in Tucson, "…it's two, totally different types of information. And, many times, the serious warnings that the doctor is informed of may not be in the patient information."

J & J may have won the levaquin side effects lawsuit in New Jersey alleging levaquin tendon ruptures. However, the manufacturer of the powerful and potent antibiotic faces about 2,000 more lawsuits brought by disgruntled and injured patients across the country.

One of those alleged victims of Levaquin is Jenne Wilcox, a young mother and former first-grade teacher who had to give up her job and was suddenly bedridden after taking Levaquin prescribed to her following routine sinus surgery. According to an interview on The NewsHour in June, Wilcox initially developed severe pain in her joints and muscles??"issues that grew worse even after she stopped taking Levaquin.

It wasn't long before she could no longer walk. Effectively bedridden for two years, she has improved in recent years to the point where she can handle physical therapy three times a week with the help of her husband. She still endures levaquin muscle pain.

However, her doctor cannot say if Jenne Wilcox will ever improve to the point where she can go back to work and lead a relatively normal life. The young mother and teacher had to quit her job, and the loss of her income cost the Wilcox family their home.

John Fratti, a another levaquin medication victim who now works part-time as a consumer advocate for the FDA, noted in the PBS NewsHour interview that he has lost hundreds of thousands of dollars in lost wages due to his Levaquin issues??"not to mention thousands of dollars in out-of-pocket medical bills stemming from his disability following a round of the Levaquin antibiotic.

Doctors interviewed in the NewsHour segment noted that levaquin medication is an extremely powerful and effective drug that was designed to treat the most serious infections??"and thus, any risks associated with the drug, in such context, would be the lesser evil when compared with those associated with a serious infection going unchecked. However, there are those who feel Levaquin is being over-prescribed, likening the use of levaquin medication to using cannon fire to kill a mosquito.

More LEVAQUIN News
What's more, drugs are initially tested on a small group of patients with a certain set of criteria. A drug testing well against such tightly controlled criteria is then released to the public at large, without really knowing the true impact a drug would have on the wider population.

The jury in New Jersey felt that warnings on levaquin medication were sufficient to inform the two plaintiffs who claimed levaquin tendon problems. It is not known if the plaintiffs will appeal.

As for Jenne Wilcox, she is still waiting to get her life back after experiencing levaquin side effects. Meanwhile a viewer posting in the "Comments" section of the NewsHour website urged, "Don't wait like I did! File a levaquin lawsuit NOW!"

Posted by
Rebecca
on August 23, 2014
I was prescribed Levofloxacin to treat pneumonia in January 2014... My hair started thinning 3 months after. Handfuls of hair coming out. My bladder started hurting 4 months after. It used to be a periodic pain. It's growing stronger and more often. Other issues too. Weight loss... Bouts of Confusion... Bouts of vertigo...
This antibiotic is Poisen and should not be given out unless you have Eboli or Anthrax! Even still, next time a health practitioner prescribes me ANY meds (not just antibiotics), I'm going to ask for a written review of side effects. Forget it if it has a black box warning!
Posted by
Ami
on July 3, 2013
I could not agree more with you Vicky.

My sinus infection is long gone but the pain caused by Levaquin continues...Both heels and my good hip. I already have mixed connective tissue disease/autoimmune disorder.. In fact my doctor
told me bone/tissues don't heal when on Levaquin..And of course my dental implants failed as well as soon as I started taking the antibiotic!!! CVS gave me NO warnings on package????

I want to sign on to the class action law suit!!!
This should be off the market ASAP!
MY eyes have gotten worse and I am in so much more pain..
I want those J&J'rs on Levaquin for life!


Posted by
Vicky Royer
on January 20, 2013
I was prescribed Levaquin 500mg to take once daily on January 16, 2013 for a possible Intertitial Cystitis infection as Ciprofloxacin 500mg did not take care of the trace blood found in my urinary tract. I know that the two meds are from the same class of antibiotics, but I never had a problem taking the Cipro before. I have always felt fine except for the nagging bladder pain.
I had an immediate reaction to the Levaquin when taken at 12:08pm on the 16th. At first my right leg was extremely painful. The left leg developed a dull ache and had felt like a tendon pull. I got through the night by taking some Tylenol. But when 6:30am came around, I knew I had to go to the ER and fast! I had four vials of blood drawn and the attending doc said everything looked normal. He also ordered an ultrasound of my legs to determine if there had formed a blood clot......Normal!! With another emergency coming in....he quickly stated...well, if could be fibromyalgia...NOT!! I knew it was the Levaquin. Again, I must state that I felt perfectly fine before taking it. No pain anywhere. He gave me Norco (Vicodin 5mg/500 APAP). People, my legs were very swollen, the left more than the right and very painful.
I went home resigned to just trying to move through this as quickly as possible. NOT! I ended right back in the ER in the evening about 8:00pm. The attending doc said I had been given the wrong medication for the symptoms I was complaining of. He gave me a shot of Toradol (IM) to help reduce the pain and inflammation. He sent me out the door with a rx for Naprosyn, which in itselfs, has serious side effects. Today is January 20, 2013 and I am scheduled to see my pcp tomorrow. I'm gonna step on peoples toes. Nobody has a right to disable another person no matter how unintentional it is. I would like for the people who work for the maker of this drug to try to take JUST ONE and see how you like it.....YOU PROBABLY WOULDN'T BE ABLE TO GO TO WORK THE NEXT DAY!!!!
I have filed a class action law suit against Johnson and Johnson. This medication is debilitating people or worse...killing them. GET IT OFF THE MARKET NOW!!

Posted by
Kathleen Alzheimer
on January 18, 2012
I took Ciprofloxacin on September 1, 2011 for a bladder infection. I had reaction after taking 2 pills. Muscle and or tendon pain through my whole body. Other reactions I had were brain fog, tinnitis, and extreme fatigue.
I returned to doctor following week to get help for all the pain I was in. He did blood work to rule out lyme, rheumatoid arthritis,etc. Everything came back normal. I told him it was the antibiotic. Not knowing what to do, he said I should see a rheumatologist . He never told me about any black box warning when he prescribed med or after I went back. Today is January 18th, and I am still in pain mostly my shoulders and neck. I have an appointment in 2 weeks with orthopedic dr. to find out it I have tendon damage. I tried another MD and he just wanted to do same tests and would not consider the drug as the cause. I just hope & pray that something is done to stop the use of these drugs for infections where other antibiotics work just as well and are not poisonous like fluoroquinolones. Thank you for allowing me to comment. I am one of the Wall of Pain.