Patients who have taken the Levaquin antibiotic and suffered the reported Levaquin side effects know how painful those side effects can be. Frank G. (not his real name) says that his Levaquin medicine experience was "horrible." He says he may not fully recover from his tendon problems for 6 months to 1 year. 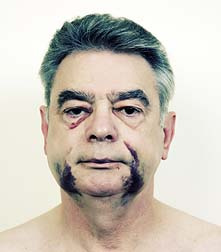 After Frank was released from the hospital, he experienced intense swelling in his face. The swelling put pressure on his trachea, limiting his ability to breathe. He was admitted to hospital, put in intensive care and given steroids and antibiotics. Eventually, Frank was released from the hospital again, although he was readmitted a few times because he developed an infection and was not healing.

"In late January or early February, I had a relapse [of the swelling]" Frank says. "My wife or my daughter—I don't remember which—took me to my surgeon's office. He was in surgery, but his associate took a needle and drained 20 to 30 CCs of fluid from my neck to reduce the swelling. He was going to have it cultured and said that he would put me on Levaquin. I didn't know about it—I just said okay.

I went to the pharmacy and picked up the prescription. It was 500 mgs a day for 10 days, which I've discovered was a standard dosage. I started taking it and had some aching sensations in my legs about midway through taking it. I didn't realize that was related to the Levaquin, and the bottle says to take it until finished, so I did.

Keep in mind—I haven't slept in a bed since January 15. I can only sleep in an S position on my back. I have a chair I sleep in that allows me to be in that kind of a position. The morning after I finished taking Levaquin, I woke up and tried to get up from the chair and was in the worst pain in my whole life. It was like the backs of my legs were on fire—like someone had a blowtorch on them and my shoulder.

I told my wife to take me to the hospital because there was something wrong. I tried to walk to the shower and I fell a couple of times. I couldn't straighten up properly. For the first time in 50 years, I cried because I was in so much pain—and I was in the military. The pain was unbelievable.

We got to the emergency room and they put me in a wheelchair and then put me on a table. They were concerned about blood clots, so they checked but I didn't have any. Then, the ER doctor looked at me and asked, 'Have you been taking Levaquin?' I was shocked and said that I had, and he said, 'My God. With the steroids you were on and your age, that is a no-no.'

It's been kind of a tough road back. I'm about 50 to 60 percent back. My primary care physician put me on an anti-inflammatory drug, for probably 60 days, and it is a slow process. He said it would be 6 months to a year before I am back to normal. He said all my tendons were inflamed and if I wasn't careful a tendon could burst. I've tried to be careful but I'm still in pain. My right shoulder I can raise maybe an inch, if I raise it straight up. As for my legs—I can walk a bit, but only if I take Advil or a painkiller.

My wife wants me to see specialist about my shoulder because of the lack of mobility. I don't want any more surgery. I'm certain that it's most likely the rotator cuff and there's not much that can be done about.

I've read a lot of horror stories about this [Levaquin] and mine mirrors others except that I don't think I had a tendon burst.

It's the worst pain humanly possible. I've never had pain like this and I've had a broken neck. I have a high tolerance for pain; I don't feel needles. This pain—I guarantee you if you could give this concoction to someone as torture they would tell you what you wanted to know. That's the worst part: the absolute horror and pain. I told my primary care physician that I'm wearing down mentally because the constant pain wears you down. He didn't know what he could do. I have to try to live with it.

More LEVAQUIN News
My tendons are tight right now. When I first start walking it is very difficult—I'm worried I might fall—but once I get stretched it's a little easier. I used to run 8 miles a day, when I was younger. You go through stretching exercises before you run. I had tendonitis as a runner, but it was nothing like this. It was the same kind of pain but much less intensity.

My opinion is that the doctors don't know about the side effects. The ER doctor, he knew. But the other doctors, I don't think they knew. I hate to see someone go through what I went through. I can't imagine if your tendons ruptured, what would happen to you. I can't believe my surgeon's associate would casually put me on Levaquin, at my age, after what I've been through, if he had known about it. I don't know for certain, but I don't think he knew."