"The antibiotic Levaquin is supposed to be used as a last-resort antibiotic but I don't think that doctors were told that by the manufacturer," says Mike. "Levaquin antibiotic is a blockbuster for the drug company and they aggressively marketed their drug but it should have been used only when other drugs didn't work.

I was having a lot of fun with life but that's over, thanks to Levaquin side effects. Now I wonder if intolerance to this drug is hereditary and I tell my kids not to take these kinds of drugs unless absolutely necessary. When it comes to taking a drug like Levaquin (and probably Cipro because that is in the same class of drugs) it would have to be a life or death situation; I found out that is what this 'big gun' antibiotic was originally marketed for. This drug is overused and over-abused. I wasn't ready to retire. 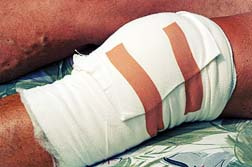 I went into August 2002 the hospital to have a total knee replacement and was sent to rehab center at the hospital a few days after surgery. Unfortunately I got a urinary tract infection and Levaquin was prescribed. Then I went home with more Levqauin and I've never been able to bend that leg again.

I was told that I built up massive amounts of scar tissue, but there is no reason that I wasn't able to bend that leg; the appliance was fine, everything was fine. How could I have developed scar tissue so quickly, within a week? Scar tissue builds up over time. Orthopedic surgeons have no idea. All I know is that my leg was fine before surgery except for the fact that I had bone rubbing against bone. We tried to treat it with therapy and cortisone treatments.

Two months after surgery, the orthopedic surgeon took me back in the hospital to have a manipulation and it just got worse. He couldn't figure out what was wrong and nobody asked about the meds I was taking. But then I saw an article about Levaquin in the news—Bingo!

More LEVAQUIN News
The following year I had my right knee replaced and I have never had a problem with it. I didn't take Levaquin that time. In one respect, it was a relief to finally have an answer, but there isn't an answer for treatment. These drugs are put on the market and cause so many problems. What I find shocking is that Levaquin has been in the marketplace for so long and approved by the FDA years ago yet both the manufacturer and the FDA know of Levquin's adverse events.

I've had to make a lot of changes to my life, including a substantial income reduction; I've worked in construction all my life and sometimes it's hard just to get out of bed in the morning. I can't even pick up my little girl; I have learned to do things to minimize the pain and discomfort such as walking a different way: what else can you do?"