"The first day that I took Levaquin (earlier this year for a slight sinus infection), I woke up later that night to a high-pitched ringing in my head—I thought it was the fire alarm," says Marcia, a ballet teacher. "I jumped out of bed but the sound came with me, it was in my head." 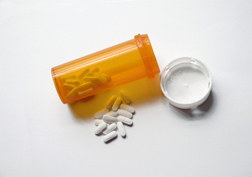 The next day, Sunday, Marcia saw the doctor at a walk-in clinic, who said it was probably just her sinus infection breaking up and to continue taking the meds. "He didn't know I was taking Levaquin and I didn't tell him," she says. Had she done so, that information may have prevented more damage. But Marcia's pharmacist knew otherwise: she looked into Levaquin and told her that tinnitus, along with her ruptured Achilles tendon, was a rare side effect, but that news came later…

"Four days after starting Levaquin, I got a huge, swollen Achilles tendon," says Marcia. "There was no reason for this to have happened because I hadn't taught a ballet class since Saturday and I had no injuries. I couldn't teach at all; it was so painful that I could barely walk.

"As it turned out, I had a chiropodist appointment the next day for bunions on my left foot. While I was there I showed him my Achilles tendon. 'My goodness this is extremely bad tendonitis and you are going to need physiotherapy,' he said, adding that he had no idea how it could happen without an injury.

"By Friday, a week later, I was going crazy with the ringing in my head. I was getting very worried and tried to see my GP but couldn't get in. Instead I went to another walk-in clinic. I described the ringing and told the doctor I had it for a week—since taking some sinus antibiotic.

"'Do you have any other symptoms?’ he asked, and I said 'No, but I do have a very bad Achilles.' As soon as I showed it to him, he told me to sit down, took my blood pressure and asked what medication I was taking.

"'Why do you want to know about the med?' I asked. 'Because the ringing and swollen Achilles can be a side effect of a certain drug,' he replied. He took my blood pressure and it was quite high; that was odd because I am always normal. (Turns out that's another Levaquin side effect.) Then I had an ECG, which was fine—phew.

"Anyway, I didn't know the name—I had left the med at home, so I phoned my husband to check. When I told the doctor it was Levaquin, he told me to stop taking it immediately.

"I was shocked. Why was he taking my blood pressure? Am I OK? And I was very scared. He mentioned sending me to the hospital. I asked him if anything worse could happen to me. 'No, you are going to be OK but stay off the drug, stay off your foot and ice it, and take anti-inflammatory drugs,' he said.

"I couldn't believe it! I went to the pharmacist and asked for a leaflet on Levaquin because I had thrown mine out. We went through the safety information on the leaflet together and there was no mention of tendonitis or ruptured tendons, or tinnitus side effects. Meanwhile the ringing was (and is) still driving me crazy; it is the highest-pitched sound piercing through my head—I can't stand it.

"My pharmacist researched Levaquin further and discovered there is supposed to be a meeting in Canada sometime this year regarding a black box warning being attached to the label. She researched all the pharmaceutical information and found out these side effects I have are so rare that Health Canada decided they weren't common enough to add this warning. But that isn't good enough: I have to live with these side effects and I am so miserable.

"I had an MRI last week and the neurologist wants to see me again after I see the ENT specialist. (My GP, who prescribed Levaquin, said he has never heard of these side effects.)

"Another pharmacist said all I had to do was squirt some water up my nose to get rid of my sinus problem—it was basically dryness. I didn't even need to take this drug. I am not the suing type but I am so mad. I would never have taken Levaquin if I knew about these side effects. I can't even go for walks and, of course, it has hindered my career.

More LEVAQUIN News
"Teaching ballet is my passion and my life; I have taught all ages and given my students a love and appreciation of dance and music. In fact, there is an Arts Center in Georgia being named after me, from a student I taught 30 years ago—she said that I gave her self-esteem and kept her going. But now I can barely teach. I even tried teaching with high heels to take the pressure off, but that didn't work too well. And because of the Achilles, I automatically turn my right foot slightly out to compensate and prevent the pull on the Achilles when going up and down stairs. So I'm walking a bit like a Penguin and my back is out—it is affecting the sciatica. I am a mess and I'm very, very angry.

"I saw the wonderful doctor at the clinic the other day and told him I still had the ringing in my ears. He said not to worry; it will go away some day. Then he looked at my foot, which is still swollen and bumpy. All I can do is rest and ice, and hope for the best, but I might have this tinnitus forever!

"I found out that the FDA received adverse reports about Levaquin back in 2006—I took this drug in 2011. Why is it still on the market? And now I am afraid of taking any drug. 'We still prescribe Levaquin because it has more benefit than harm,' I was told. How can drug companies play with people's lives like this?"

Posted by
Kenneth g. Todd
on February 28, 2016
I was hospitalized in December 2015 for a bout with colitis with blood in stool , they took stool sample and before even getting results started iv administration of levaquin .Since then I have had unrelenting ringing in my ears, it sometimes is so bad it awakens me from sleep