Just two weeks after taking Levaquin for an earache, Charles had a dull, aching pain in his wrist. Although this happened in 2008, he remembers it well. "I had taken my daughter to Disneyland and couldn't even turn the doorknob and open our hotel room," he says. Turns out, Charles suffered a torn tendon, an increasingly common Levaquin side effect. 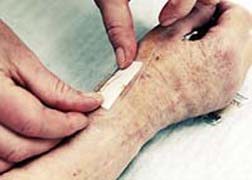 Charles finished the 10-day treatment before going on vacation and asked his Ear, Nose and Throat doctor for another Levaquin prescription. "As soon as I got home, my doctor sent me for an x-ray but it came back negative," says Charles. "Then he pressed on my wrist and I stood up in pain. 'You have a torn tendon,' he said. He said it could be an old injury but I never hurt my wrist before. I couldn't understand how that happened—I would remember having an injury. And of course this would be the hand I write with.

"I got an MRI in October, which confirmed a partial tear. By the time I had surgery it was the end of January. While I was in the recovery room I found out that the surgeon did a tri-fuse on three bones in my wrist (now I need a total fusion but that's another story)—another surprise.

"Not long after I went through the rehab treatment, my wife was surfing the Internet and came across Levaquin and Cipro lawsuits. Can you imagine my reaction? I asked my surgeon about my tendon tears and the Levaquin link but he just blew it off. He said I had to learn to live with it—there is nothing else to be done. But I can't go to the bathroom properly, I can't turn a doorknob. I'm retired but it's hard to help the wife around the house.

"Today I dropped and shattered the puppy's dog bowl that cost $17. I tried to shovel snow the other day and that did me in for a few days. It even gets worse: As a result of the surgery I now suffer from neuropathy, nerve pain. I know this is all due to Levaquin and if a doctor won't listen, maybe an attorney will."

More LEVAQUIN News
Levaquin, which is part of a class of antibiotics known as fluoroquinolones, was recently included in a quarterly report by the Institute for Safe Medication Practices about potential safety signals found during a review of problems reported to the FDA in connection with the medications.

In January 2011, ISMP released a monitoring report (.pdf) based on adverse event reports made to the FDA's MedWatch program during the second quarter of 2010. One of the most serious safety signals observed included reports of tendon ruptures with Levaquin.

Furthermore, ISMP said that the reports of Levaquin tendon rupture and inflammation suggest that the "FDA should consider a special warning for that drug, alerting patients that it appears to be more prone to tendon problems than other medications in the same class, all of which carry the same black box warning of potential tendon rupture."