FDA Solidly on the Fence over Laparoscopic Uterine Surgery

It remains somewhat of a curiosity that the US Food and Drug Administration (FDA) recently approved a containment device for powered equipment used in Laparoscopic Uterine surgery, equipment that the FDA has previously warned against using amidst the possibility that undetected cancerous cells could be spread throughout the abdomen. 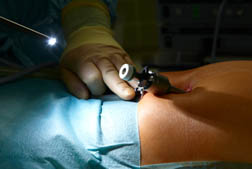 Then again, the FDA stopped short of issuing a recall of the power morcellation devices, even after one manufacturer voluntarily withdrew its powered equipment for Laparoscopic Uterine surgery from the market. Specifically, Johnson & Johnson issued letters to health care providers two years ago this July, suggesting that “the risk-benefit assessment associated with the use of these devices in hysterectomy and myomectomy procedures for removing fibroids remains uncertain.”

The FDA holds the same position. It warned that Laparoscopic Uterine surgery for hysterectomy and myomectomy for fibroid removal puts the patient at risk for the spread of a uterine sarcoma - an undetected form of cancer amidst a collection of benign fibroids. Laparoscopic Uterine surgery has been seen as spreading an otherwise undetected sarcoma to other parts of the abdomen, reducing a patient’s chance of survival.

Various ovarian cancer lawsuits allege just that. One such lawsuit filed by plaintiffs Janet and Randy Gager allege in a lawsuit filed in California Superior Court in April of this year that Laparoscopic Uterine surgery performed while using equipment manufactured by Karl Storz Endoscopy America Inc. fostered a spread of cancer throughout Janet Gager’s abdomen.

When the issue first bubbled up to the surface a few years ago, many hospitals stopped using the powered Laparoscopic equipment altogether. Others refused to perform any kind of Laparoscopic Uterine Surgery for women without first using a containment device that would prevent the spread of potentially cancerous fibroids.

Such a containment solution appears to be what the FDA stamped as “approved,” as outlined by Heidi Turner in her article on the so-called PneumoLiner, designed to contain uterine tissue during Laparoscopic Uterine surgery using powered devices.

The approval, the FDA said, is in no way an endorsement or a claim that the PneumoLiner is effective in reducing the risk for spreading cancer.

“We are continuing to warn against the use of power morcellators for the vast majority of women undergoing removal of the uterus, or uterine fibroids.

More LAPAROSCOPIC POWER MORCELLATION News
“This new device,” continued Dr. William Maisel, MD, MPH and the deputy director for science at the FDA Center for Devices and Radiological Health, “does not change our position on the risks associated with power morcellation.”

Thus, the FDA has approved a device that has not been proven to work in the important area of preventing cancer from spreading from power morcellators in the vast majority of cases.

The FDA has identified that one out of 350 women undergoing a hysterectomy or fibroid removal through Laparoscopic Uterine surgery will likely have an undetected uterine sarcoma.

And yet, there has been no mass ban of morcellation devices used in Laparoscopy.