In spite of a position taken by the US Food and Drug Administration (FDA) that Laparoscopic Uterine Surgery for women Involving power morcellators only be used in relatively rare cases, Olympus America Inc. has released a new power morcellator equipped with a containment bag. 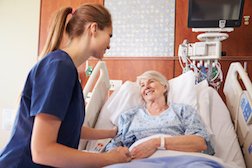 Power morcellation had been widely employed in recent years for Hysterectomy, treatments for fibroids and other surgical procedures involving women at menopause. Less invasive than traditional surgery, Laparoscopic Power Morcellation involves the insertion of morcellators through a small incision. Rather than removing fibroids or the uterus intact as is done with more traditional surgery, laparoscopy allows for access to the uterus through a small, minimally-invasive incision. Laparoscopic power morcellation excises, or sections the fibroids or the entire uterus into small fragments, which can then be evacuated and removed through the small incision.

The procedure is designed to speed healing time. However, lawsuits have alleged that laparoscopic morcellation risks spreading undetected cancers throughout the abdomen. With power morcellation in wide use, some hospitals adopted a containment bag in order to contain fragments and potentially minimize the risk from undetected cancers – but most hospitals soon gave up on that.

Johnson & Johnson pulled their power morcellator from the market at some time previously, and the FDA developed a position that suggested morcellation should only be used as a last resort, and only in the rarest of occasions.

Now, according to The Philadelphia Inquirer (11/16/16), Laparoscopic Power Morcellation is making a comeback – or at least, that is the hope of Olympus.

Olympus’ new system, “is the solution that will allow gynecologists to once again safely and effectively offer minimally invasive hysterectomies...as options to certain low-risk patients,” said Todd Usen, president of the medical systems group at Olympus, in comments published in The Philadelphia Inquirer.

The news of a new morcellation device coming into the market is not sitting well with cardiac surgeon Hooman Noorchashm, whose wife Amy Reed – an anesthesiologist – has been battling cancer since a laparoscopic power morcellation procedure in 2013 spread a previously undetected leiomyosarcoma throughout her abdomen.

Reed, the mother of six children, underwent extensive surgery last month at the University of Pennsylvania to fight the latest recurrence of her metastatic cancer.

More LAPAROSCOPIC POWER MORCELLATION News
“The FDA has essentially released this new device without any clinical safety testing,” Noorchashm said, in comments published in The Philadelphia Inquirer, noting that a study of a similar experimental containment system found that it leaked 10 percent of the time.

Olympus says in laboratory tests the containment bag did not leak cells or bodily fluids. Nonetheless, the manufacturer will be required by the FDA to market the device with a warning that the Olympus laparoscopic power morcellator “has not been proved to reduce the risk of spreading cancer.”

The Philadelphia Inquirer reported that most hospitals no longer employer morcellators for Laparoscopy Uterine Surgery for women and insurance no longer covers the use of power morcellators.

Posted by
Sarah Salem Robinson
on December 21, 2016
During the July 2014 FDA meeting over the issue of the Power
,
!) the issue of Pathology identification of a "missed" tumor/malignancy was addressed when morcellation (ground or scrabbled tissue) is performed on an unknown mass. It is plausible that Pathology Reports will be inaccurate, as pathologists can't guarantee a "missed" sampling has occurred, leading to a 'missed" or "hidden" (tumor) diagnosis. To date there is no reliable testing before surgery to rule out malignancy in the uterus or ovaries. Therefore despite GYNs who insist on a morcellation comeback, it is never good medical to grind up a Gyn tumor or organ.

2)with extensive research, it was determined and stated that containment bags were found to leak 50% of the time. The FDA 's decision was that containmentbags are unreliable to stop spread of a "hidden" malignancy

To test new containment bags for the use of the Power Morcellator ,theyroutinely test by injectiion of a dye. If no dye is visually seen outside the bag, manufacturer assume there was no leakage. The problem with this type of logic, is that a macroscopic view (dye) does not indicate "microscopic" leakage (tissue/tumor cells).

Dr. Noorchashm is correct to point out that the FDA 'spoor judgement allowing the containment bag to reach the market iswithout "clinical testing". This decision is unethical and does not show respect for patient safety.