If Margaret knew that the FDA in 2014 had warned health providers of cancer risk in laparoscopic power morcellation surgery, she would have opted for a “traditional” hysterectomy. Two years later she finished her last round of chemotherapy to treat ovarian cancer. 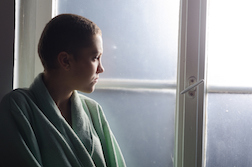 Margaret’s gynecologist advised her to have a laparoscopy rather than the “old school” hysterectomy to remove fibroid tumors on her ovary. The procedure is less invasive and therefore a faster recovery. “I’m an active person, and my waitressing job kept me in good shape. I was only 45 years old so I was figuring I would be back to work in three months,” says Margaret. But more than two years later she is still on disability.

She had never heard of, and was never told about, the power morcellator cutting device used during the procedure.

“I felt great after the hysterectomy but about six months later I complained to my primary doctor about abdominal pains,” Margaret says. “She thought it was due to scar tissue and maybe I was working too hard--I am the only graveyard waitress and sometimes work double duty as cook. So that made sense but the pains got worse. In early 2016 I wound up in ER, doubled over with pain and with lots of bowel issues. I had no appetite and sometimes couldn’t eat even if I was hungry. They thought it was my gallbladder or appendix. But all kinds of scans, blood work and an ultrasound showed nothing.”

A few months later Margaret was back in ER. This time she had a CAT Scan with contrast dye. “It lit up like a Christmas tree, showing five (possible) cancer masses in my abdominal area. But I had to fight with my insurance for 12 weeks to see an oncologist,” adds Margaret.

“I found out that ovarian cancer is the silent killer. Surgery was scheduled right away and the ER doctor asked who my gynecologist was. Turns out he wasn’t working at that hospital anymore and his office was closed. I was trying to get some answers and I did find out that the Power Morcellator was used in my surgery, but I don’t know which model.”

Margaret did find online the FDA warning from 2014 recommending that
manufacturers add a boxed warning to Power Morcellator labels. The agency also warned that the "vast majority" of women undergoing removal of the uterus (hysterectomy) or fibroids (myomectomy) should not have surgery that involves the use of a power morcellator!

Many surgeons prefer using a power morcellator to cut up uterine fibroids for removal because of the ability to make very small incisions, meaning that it is a less invasive procedure. But if those fibroids contain some form of cancer the device can actually spread cancer cells throughout the body when the tissue is cut into miniscule pieces.

Some surgeons—such as Margaret’s gynecologist— may have ignored the FDA warning.

“The game plan for the hysterectomy was to leave my ovaries intact so I wouldn’t go right into menopause,” says Margaret, “but my gynecologist found one ovary enlarged the size of a grapefruit with the fibroids, so he removed that one. Later, when the ball finally dropped, I discovered that fibroid tumors mask cancer cells…”

More LAPAROSCOPIC POWER MORCELLATION News
In February 2017, the same time that Margaret had her last round of chemo, a report issued by the US Government Accountability Office revealed that the FDA already knew of the potential risk for laparoscopic power morcellators to spread cancer 22 years before issuing its 2014 warning, saying that the FDA "was aware of the potential for power morcellators to spread tissue (cancerous and noncancerous) when the agency cleared the first device in 1991" but believed there was a low risk of unsuspected cancers that could spread.

“My disability insurance is running out so I am getting worried,” adds Margaret. I go back to the doctor in two months and maybe I can waitress part-time. Meanwhile, I am hopeful that I can discuss the possibility of filing a power morcellator claim and join hundreds of women in their lawsuit alleging cancer diagnosis after a hysterectomy. And I hope that women reading this will spread the word not to undergo power morcellator procedures.”