Since she had a Kugel Mesh Patch implanted, Sarah H (not her real name) has suffered many complications. She believes that the Kugel Mesh hernia repair patch has caused a lot of her problems, but her doctors are still having trouble figuring out what exactly is going on with her. However, Sarah says that since the Kugel Mesh Patch was implanted, she has not been able to enjoy life because of the pain she goes through daily. 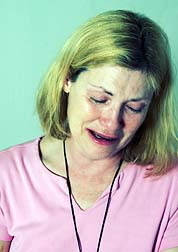 Sarah initially suffered a hernia while at work in the 1990s. Following her hernia repair surgery, she suffered a staph infection, severe pain and other problems. Years later, Sarah had a follow-up surgery to repair those issues. During this surgery, her doctor implanted a Kugel Mesh Patch.

"In the few months following surgery, I had very sharp pains," Sarah says. "I was very sick, nauseated, very dizzy—a lot of the time I was dizzy—and my bones ached. I had pain in the left part of my hip and lower back around to my stomach. I still suffer with it very badly.

"After that second surgery was when I started losing my hair. I have to wear a prosthesis wig because I lost all my hair. I had infections, chills and fever. I was fatigued during that time and I still am. I ended up with splotches on my body from rashes that broke out. I had a multitude of things going wrong with my body.

"It's so much to tell that I can't tell it all. It's been years and I've gone to several doctors about my stomach. My stomach is lopsided: where I had the hernia repair my stomach hangs down and I have to wear a panty girdle to get around. If I don't wear it I can't get around because of the pain on the left side of my stomach.

More KUGEL MESH News
"I work at home doing little things that I can do. I know I can't do a day-to-day job because I would not be able to keep it. I can only sit so long, I can only lie down so long, I can only stand up so long and I can only stand so much exercise. I can't walk very far. Most of the time I end up being in bed until noon just so I can function the rest of the day. I'm very tired—I'm worn out. Right now, even sitting here talk to you, I feel nauseated and my stomach hurts. I'm just sitting here putting up with it. I don't know what else to do. I'm totally lost.

"I have pelvic pain and intestinal problems. I've tried to get some kind of relief for my stomach, but so far nothing has worked. I've had MRIs and x-rays and the doctors don't know what is wrong.

"I read about that other woman, the one who died, and what she went through sounds like what I'm going through. I wouldn't want anyone else to go through what I go through daily. There are daily activities that I cannot do. I can't enjoy myself or my grandkids. I've lost out on time with them and on time being with my daughter because I was too sick to go and do things."

Posted by
Ievo
on September 27, 2013
Bad form to comment on my own post, I know.. but an utpade to Mesh has come out WOOHOO however the missing letter bug is STILL there meaning the whole thing is pointless still! NOOOOOOOOOOOOO
Posted by
Julia Reagan
on January 30, 2012
Poor thing. I had the exact same thing happen to me. exactly as described, just wondering if you ever received any help and who from. I still suffer in pain.