In the months following the implantation of a Kugel Mesh hernia patch, Louise [not her real name] had several surgeries to try to repair complications that arose. The main complication Louise dealt with was a continual infection. That may not seem like a major problem, but it meant that she underwent 7 surgeries in a fairly short time. Like many people who suffered complications after being implanted with a Kugel Mesh Patch, Louise says her ordeal was traumatic. 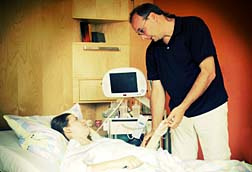 "Well, I had the hernia repair and about one week later, I started having a lot of drainage through that wound," Louise says. "I turned out I had an infection. I ended up back in surgery and I had many surgeries. I would have a surgery every couple of weeks or so to try to repair the infection and then the infection would come back.

"They [doctors] tried to keep from removing the mesh, but it didn't work out that way. They would drain the infection and clean it out and it would still be infected. My stomach was open the whole time—you could see the mesh. No one knew why it was infected. Finally, I had a final surgery and they took the mesh out, but they left my wound open for about 3 months—maybe longer than that.

"They sent me to Memphis to have surgery, where they attempted to close my hernia, but by that time the infection had eroded my abdominal wall muscle.

"By that time months had passed, I gained weight, which hampered things. I ended up having gastric bypass surgery and a hysterectomy. I finally got the hernia fixed, but it took about a year for it all to be over. I'm still having problems with my side.

"The hernia is now repaired as good as it can be —but I think my leg problems are because of all those surgeries. Even after they took the mesh out I had to have dressing changes and take antibiotics for a long time. It took a lot to get it healed.

"People don't realize until they go through this how traumatic it is. From what I understand, one of the things the mesh causes is an infection. Now, there is continual discomfort in my leg. I'm relatively young—46 years old—and I'm told this will not get better. I've always been an active person and now I'm not as active. It's stressful; it really is."